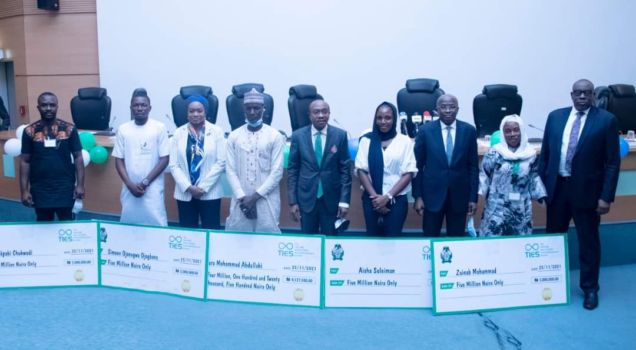 As a way of tackling the problem of  growing youth unemployment in Nigeria, the Central Bank of Nigeria (CBN) on Thursday  formally launched the Tertiary Institutions Entrepreneurship Scheme (TIES) in Abuja.

The apex bank also presented cheques of N5million each to six pioneer beneficiaries of the scheme to help boost their businesses, create employment  and contribute to economic growth.

CBN Governor, Mr Godwin  Emefiele, said that the scheme was designed to create a paradigm shift among students and graduates of tertiary  institutions  in Nigeria from white-collar jobs  towards entrepreneurship development.

Emefiele said that the apex bank was collaborating with polytechnics and universities in the country on the scheme.

According to him,  the idea is to make Nigerian graduates job creators rather than job seekers after graduation, as is obtained in some other parts of the world.

“What we are doing today is something that is taken for granted in other climes.

“At the CBN, we are concerned about the level of unemployment within the youth population and we are taking steps to address it,’’ he said.

He urged the beneficiaries to apply the loans well in their businesses  so as to engender growth and create more jobs.

Emefiele said that academic certificates of beneficiaries were accepted as collateral, and would be returned to them when they offset the loans.

The six pioneer beneficiaries of the TIES  as announced by the apex bank were Aisha Sulaiman, a graduate of Bayero University, Kano and  Chukwudi Ukpabi of Federal Polytechnic, Ebonyi.

The CBN Governor also inaugurated an 11-man Body of Experts, chaired by Mr Abubakar Suleman, the Managing Director of Sterling Bank PLC, to steer the scheme.

In a goodwill message, the Secretary to the Government of the Federation (SGF ), Mr Boss Mustapha, commended CBN for initiating the scheme.

Mustapha, who expressed the Federal Government’s support for TIES, described it as one of the numerous laudable interventions by the CBN to empower the Nigerian youth.

He urged tertiary institutions to ensure that beneficiaries were selected strictly on merit.