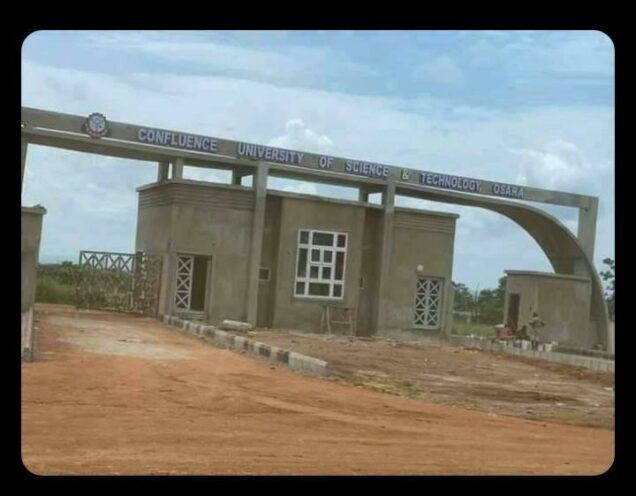 Confluence University of Science and Technology(CUSTECH)

Gov. Yahaya Bello of Kogi has said that the Confluence University of Science and Technology (CUSTECH), Osara, Kogi, was established to solve the problems of non-access to education by some Nigerians.

Bello made this known during the maiden matriculation of the University.

He said the school was established to be a world-class citadel of learning to groom graduates in science and technology.

He also tasked the Institutions’ management with producing quality graduates.

The governor said his administration was greatly disturbed by the painful experiences of hundreds of Kogi youths who were unable to pursue careers in Science and Technology due to very limited openings in universities outside Kogi.

“We found that even with impressive scores in the Unified Tertiary Matriculation Examination (UTME), cutthroat competition for limited spaces and unfavourable catchment considerations usually put our children at a greater disadvantage.

“Over the years, access to such programmes as Medicine and Surgery, Pharmacy, Architecture, Engineering and others in this category kept dwindling for Kogi secondary school leavers.

“This trend became so worrisome that we just had to act as a government to bring it to the only logical end. Problems make me combative for solutions.

“It is my default mindset that leaders exist to find solutions to the problems of those they lead or they lose their moral authority to leadership.

“It was thus my duty and the duty of my administration to solve this particular problem too for Kogi indigenes using all the resources of government at our disposal.

“We decided to take action by establishing a specialised university of our own, dedicated to science and technology.

“In establishing CUSTECH, our ultimate goal is to achieve a world-class citadel.

“It was designed and built to provide first-grade training in Science, Technology, Engineering and Mathematics (STEM) disciplines for our youth.

“By leveraging ICT and artificial intelligence, it is our plan to rapidly move the institution forward till it becomes comparable to similar schools anywhere on the globe,” Bello said.

Bello said his administration is also building a massive reference hospital in Okene which would be equipped with facilities which any ultramodern tertiary health institution would be proud of.

He said the hospital would be equipped for the diagnosis and treatment of most diseases prevalent in Nigerian society when completed.

According to Bello, the reference hospital will also be designated it to provide teaching hospital services to this great institution.

Bello also charged the newly matriculated students to consider the opportunity delivered to them to study at CUSTECH as “golden and priceless.”

According to the statement, a total of 245 Students were matriculated by the management of the institution.