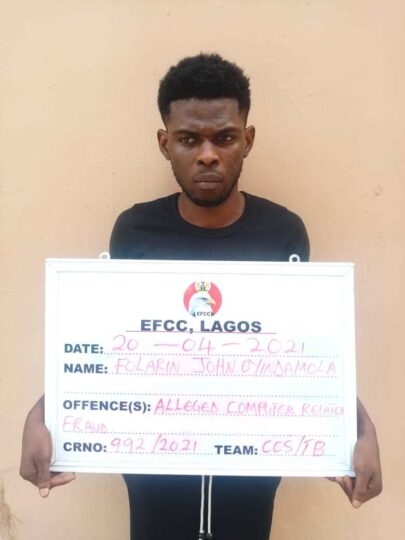 The Lagos Command of the Economic and Financial Crimes Commission, EFCC, on Friday, November 26, 2021, secured the conviction and sentencing of the duo of Folarin Oyindamola and Chidera David for internet fraud.

The duo was arraigned before Justice O.A.Taiwo of the Special Offences Court sitting in Ikeja, Lagos.

The convicts, who were among the suspected internet fraudsters arrested by the Commission between March and April this year, were arraigned separately on one count each bordering on possession of documents containing false pretence.

However, the count against Chidera reads: “Chidera David, on or about the 19th day of March 2021, within the jurisdiction of this Honourable Court, knowingly took in your possession a document containing false pretence in your Gmail Account, wherein you held yourself out as one ‘Leonard’ with email address [email protected] which representation you knew to be false.”

The defendants separately pleaded “guilty” to the charge filed against them.

Following their pleas, the prosecution, led by Franklin Ofoma, reviewed the facts of the case and tendered relevant documents to prove the case against them.