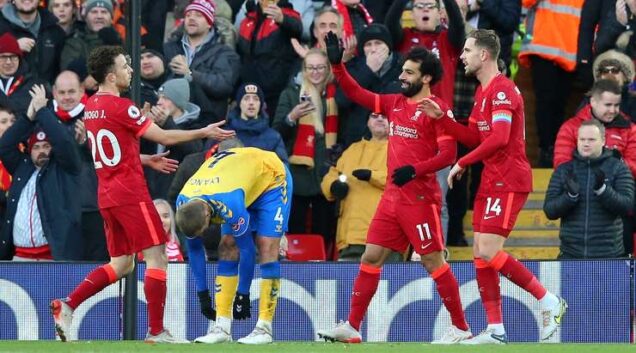 Liverpool crushed Southampton 4-0 on Saturday to move second of the English Premier League table, a point below Chelsea.

Andrew Robertson showed great vision to find Diogo Jota with a cheeky pass inside the box, and his first-time shot was precise and sailed low into the middle of the goal.

Jota got his brace on 32 minutes to make it 2-0 for Liverpool.

Mohamed Salah displayed great vision and sent a pass to Jota, who showed brilliant composure inside the box to bury the ball into the back of the net.

Thiago got the third goal for the homers on 37 minutes after he got a shot away from inside the box and the effort was deflected past the goalkeeper.

Trent Alexander-Arnold produced a cross from the resulting corner and found Virgil van Dijk inside the box.

He pulled the trigger and scored, sending the ball low into the middle of the net for a brilliant strike.