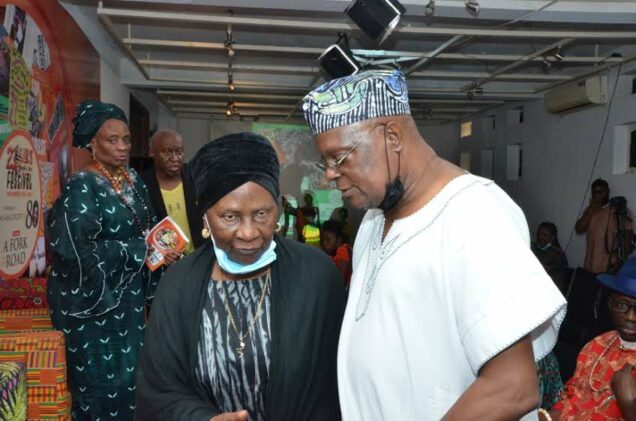 Prof. Ebun Clark, distinguished academic and first professor of Theatre Arts in Nigeria, has said the country is in deep trouble.

She gave this prognosis against the backdrop of large scale violence in different parts of the country while regretting that Nigerians no longer have a sense of history.

The accomplished professor made this statement while speaking at a symposium with the theme, How did it go awfully wrong? at the just concluded Lagos Art and Book Festival, LABAF, which held at Freedom Park in Lagos.

The event was chaired by Prof, Femi Osofisan, poet dramatist and academic and moderated by Mr. Kayode Komolafe, journalist and columnist.

The academic who had a distinguished academic career at the University of Lagos is the wife of Prof. J.P. Clark, academic, writer, poet and playwright who passed on last year.

“I want you to have this sense of history that we are going through right now so that we can sober down. In the north we have three situations going on right now as I am speaking, not two. We have Boko Haram, we have ISIS West Africa Province.

“Then we have Biafra going on and the Yoruba nationhood going on. That’s what we are coping with right now. Then we have Ambazonian that two days ago attacked the Northeast. When they now decide to attack the Southeast, we have problem. Our sense of history therefore is very important to know that history is not just past, past is also present.”

Clark warned that Nigeria is teetering on a precipice, adding that, given the country’s large population, if total war breaks out in the country, the rest of Africa will be in trouble.

The distinguished professor also lamented the abolition of history at a certain time in Nigerian schools, adding that though the teaching of history has been restored, it’s going to take a long time for Nigeria to recover from that abolition.

“I agree that we have no sense of history anymore. I don’t know which head of state abolish history in school. I can’t remember. It was a great crime because history is restored I am told in WAEC.

Clark also said the tragedy of the nation is that those who started ruling Nigeria since independence are still ruling and that is the reason the youths are clamouring for the opportunity to lead and get things right.

“The tragedy is that those who ruled before as young rulers are still with us today. That’s the tragedy. Obasanjo returned as a former young ruler.

“President Buhari is with us today as a former young ruler. This is the frustration of the youths. They should be given a chance to come in and get things going,” she maintained.