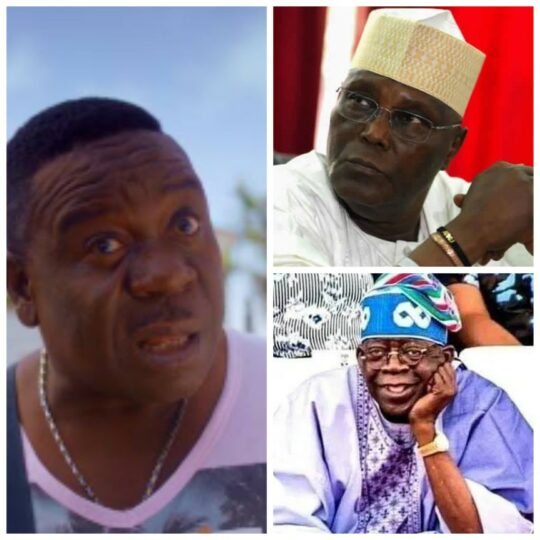 Mr. Ibu stated this on Saturday after he openly declared support for Tinubu at a conference meeting with the theme, “South West Stands with Asiwaju Bola Tinubu” on Friday.

In a video that went viral, the funnyman was seen alongside other Nollywood actors ‘pledging alliance’ to the APC leader.

Mr. Ibu, known to be a beneficiary of Atiku’s support, however, made a U-turn after he was criticized on social media.

The comic actor said he only attended the Tinubu’s event based on an invitation.

He said Atiku was like a father to him and will never abandon him for Tinubu.

“People approached me on Tinubu’s involvement to contest for president. Anything that has to do with anybody and they want me to talk about it, they’ll come and address me on that and I’ll know directions,” he said.

“I don’t know why this thing is going round like this. I’ve never run sideways. It has been me and Atiku all this time and he has taken me to places. If Atiku is contesting, certainly [I’ll support him] because he has done a lot for me.

“There was a time he changed a house for me and said I should stay there for now. He’s like a father to me. He is contesting for president under PDP? Certainly, I have been working for him even in his own state.”

Ibu also reiterated his support for Atiku, stressing that he was only delivering on his mandate as a public figure.

“The world said is the world said. I’m not trying to pull him down. He’s a good candidate. I’m not his candidate. Atiku is my candidate. A lot of people helped me when I was sick. Why will I now disappoint them?” he asked.

“These are my people. Anyone I visited, probably on an invitation, is because I’m an actor. They want me to assist in one way or the other with regard to whatever they are doing. That doesn’t mean I’ve abandoned my fathers.

“I didn’t. Everyone is contesting. May God help them. Anyone who wins, let them win. It has been like that.”