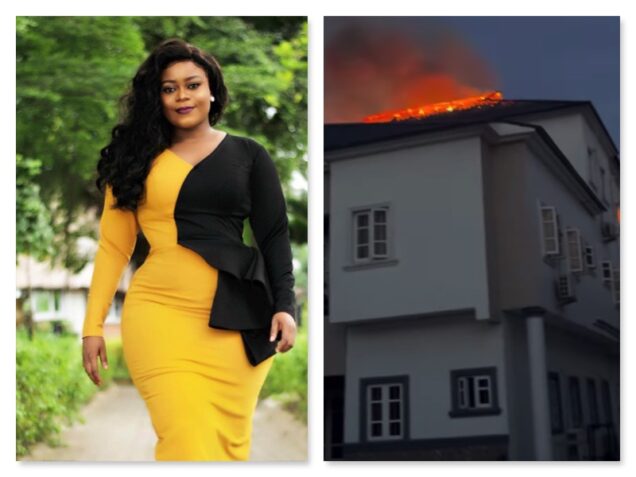 Didi Ekanem devastated as her house goes up in flames

Fast-rising Nollywood actress, Didi Ekanem was on Sunday left helpless and devastated as her house and properties were gutted by fire in Lagos.

The actress who took to her Instagram page to share a series of videos of the burning house was seen crying helplessly and confused about the situation.

Ekanem stated that the fire had engulfed everything she had worked for in Lagos.

While weeping and counting her loss, Ekanem lamented that all her late nights of hard work had gone in a second.

She added that the only tangible thing she could leave with was her passport.

The heartbroken screen star lamented that she doesn’t know what will be the fate of her and her sister as they know no one in Lagos.

She wrote: “Everything that I have worked for in this Lagos, all my efforts to have a good place to live in this , all my late nights of hardwork gone within a second . I’m only left with my passport . Don’t know where I and my sister can go from here . I’m lost! Someone wake me up 😭😭😭😭😭😭😭😭😭😭😭😭😭”

She co-starred with Juliet Ibrahim in the drama Doll House.

She studied linguistics at the University of Port Harcourt.