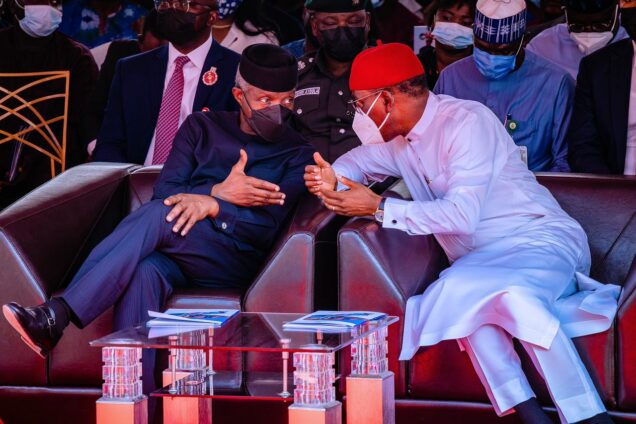 Osinbajo and Okowa at the event

Vice President Yemi Osinbajo has been described as a wise man and a great Vice President by the Asagba, traditional ruler of Asaba, Delta State, Prof. Chike Edozien.

The Asagba was speaking on Monday when the Vice President paid him a courtesy call in Asaba, during his trip to grace the commissioning of the Delta State new civil service Secretariat complex, which was also named after the traditional ruler.

The traditional ruler said, “As the Vice President of the great country, Nigeria. We know you as a very distinguished and eminent supporter of law, and we know you as a pastor of the Redeemed Church, put together, we can say that with all these qualifications and experience, that you are a wise man.

“Once again, Mr. Vice President, I thank you for coming to Asaba to listen to us. We wish you well and wish your programme in Asaba to go well, and that after the commissioning, you return safely to Abuja. Our love and regard to Mr. President. God bless you.”

Also speaking later, at the commissioning of the Secretariat, Governor of Delta State, Dr Ifeanyi Okowa, noted that “Mr. Vice President is a true statesman and an uncommon leader.”

Speaking, Osinbajo extended the special greetings of President Muhammadu Buhari to the people of the State, while expressing delight at the recognition of the traditional ruler by the State Government who named the state-of-the-art edifice after him.

The Vice President also described the Asagba as a bridge builder who has brought people together.

The Vice President said the traditional ruler “has established himself outside this nation and within the nation as a renowned professor of excellence.”

He added, “Very many of those who have built this nation without necessarily being in political office are not recognized the way they ought to be recognized. We are all excited that this recognition and immortalistaion of the name of such a person is being done by the Delta State government.”

*The VP described Asaba as one of the most peaceful places in Nigeria, adding that the capital city of Delta State has benefitted from the traditional ruler’s “dexterity and broad-mindedness to ensure that all people were treated fairly wherever they came from.”*

“I am very happy that this state has drawn from your wealth of experience, open-mindedness¸ broad-mindedness, and we are able to see a state that is moving forward, and especially this city of Asaba going forward as being one of the most peaceful places in Nigeria today,” the VP stated.