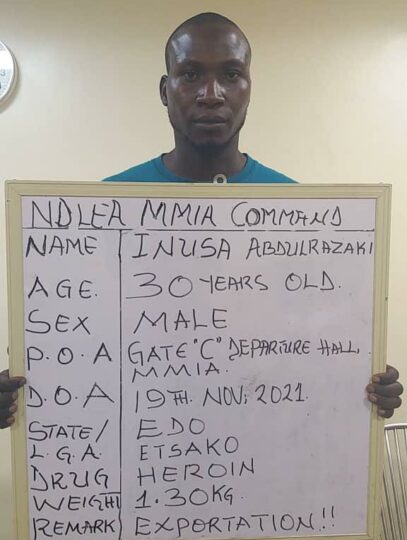 He was arrested on November 19 at Gate C -Departure hall of the Murtala Muhammed International Airport, MMIA, Ikeja, Lagos on his way to Italy via Istanbul on Turkish Airlines.

NDLEA spokesman, Femi Babafemi, in a statement on Monday said the Heroin being exported by the suspect weighed 1.3 kilogrammes.

Babafemi added that the following day, Saturday, 20th Nov, NDLEA operatives at the airport during a routine cargo search at NAHCO export shed intercepted an abandoned consignment of khat 17.90kg.

He said while commending the officers and men of the MMIA command for their vigilance and steadfastness, Chairman/Chief Executive of NDLEA, Brig. Gen. Mohamed Buba Marwa urged them to always stay two steps ahead of the drug cartels.