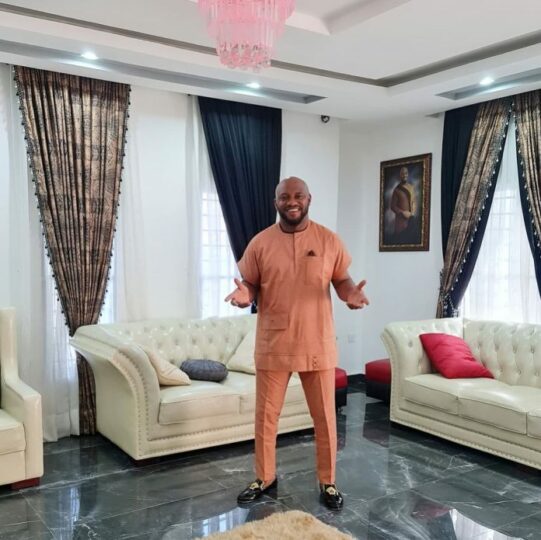 Nollywood actor and director, Yul Edochie on Sunday, November 28, 2021, announced that he has officially become a home owner in Lagos.

Edochie made the announcement in a post on his Instagram page where he shared a picture of him posing in a beautifully furnished living room as he hinted at becoming a landlord in Lagos.

The movie star who is gunning to become the next president of Nigeria in his post reflected on his grass to grace story as he recounted his humble beginning.

Edochie narrated that there was a time he was jumping from one bus to the other, hunting for movie roles at Winnis Hotel, Surulere, Lagos State while stating that he never knew he would become a landlord in Lagos one day.

He wrote: “When we dey jump bus go find movie role for Winnis Hotel Surulere, years back, we no know say one day we go own house for Lagos.
If you give up na you know oo.
Me, I never give up.
Steady hustle.
The dream is to be President of Nigeria.
And it shall come to pass.
By God’s grace.
Amen.”

Yul is the last of 6 children of Nigerian actor Pete Edochie.

He was raised both in Lagos and Enugu.

Edochie Joined Nollywood in 2005 in his first film titled “The Exquires” alongside Late Justus Esiri and Enebeli Elebuwa.

He got his break in 2007 after featuring alongside Genevieve Nnaji and Desmond Elliot in the movie “Wind Of Glory”.