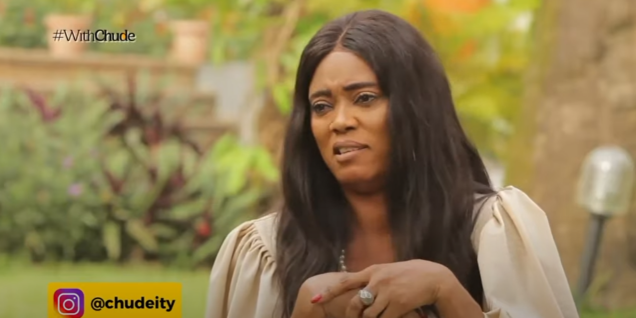 Fatima Ishiaku, author of ‘I called him dad’, has sensationally narrated how she was sexually abused for over nine years by her late stepfather.

The writer shares her ordeal with host and Co-founder of Joy, Inc. Chude Jideonwo.

Disclosing that the abuse started before she clocked five, she said, “He started using his finger on me first. I remember vividly when he said to me, ‘you are not a small girl, you are going to be five.”

Making matters worse, her mother never heard her out.

According to Fatima, her mother mutilated her based on the instructions her stepfather gave.

In her words, “she will cut my vagina and put pepper in it. She will break my head.”

Feeling she had no support, Fatima endured the abuse until she got tired of it.

She said, “I was tired. I went to report to an officer in the barracks, but I got scared. I didn’t tell him. I told him [the officer] that he [her stepfather] wasn’t feeding me.”

The officer she reported to saw beyond her story of her stepfather not feeding her.

Recounting this, Fatima disclosed that the officer tried to probe to find out what was going on. When she did not respond to any of his questions, he said, “I know this man is defiling you, but since you don’t want to say it I know what to do.”

Two months after this, her stepfather was posted out of the barracks. It was at this point that her mother realised what had been going on.

“My mother took me out of the house to stay with my uncle”, she said.

Discussing this, Fatima stated that her stepfather began raping her at that stage.

“He said to me, ‘Nobody can protect you anymore. If you do anything, I will kill you and your siblings the way I killed your mother.’’

Due to this threat, Fatima, who was seven at the time, endured constant sexual abuse till she turned fourteen.

After her stepfather died, Fatima wrote a book titled ‘I called him Dad’ that chronicled her experience.

She stated that she wrote the book to speak up about sexual abuse and to let society know that stopping the abuse “is not about carrying a banner and saying, ‘say no to rape’. It is deeper.”