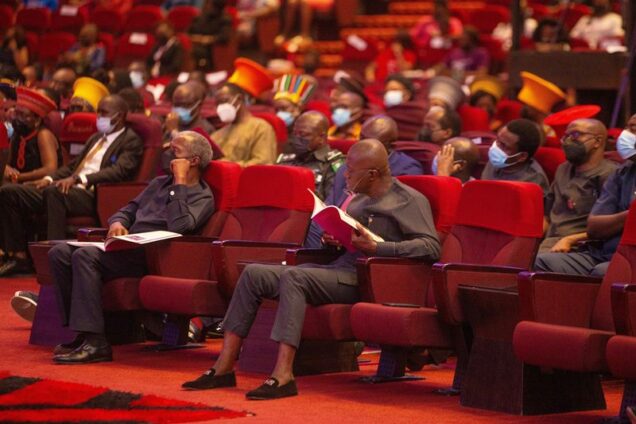 Osinbajo and Sanwo-Olu at the event

The event was held at the headquarters of Fountain of Life Church in Ilupeju, Lagos.

Also, General Overseers of popular churches in and outside Lagos state, pastors, friends, families gathered to commiserate with the family of Pastor Taiwo Odukoya, the husband of the deceased.

Several people who had the chance to speak and pay tribute to the deceased recounted memorable experiences they had with her while alive.
She was a good mother, devoted Christian, giver, lover of children and a humanitarian were words used to describe her.
About the deceased, she was christened Simangele Rosemary Zulu.
She was born on the 30th of May 1974 in Durban, South Africa. She attended Domino Servite School in the Kwazulu Natal Midlands, South Africa. She got married to Pastor Taiwo Odukoya on the 5th of January 2010. They have two sons together.
The late Pastor Nomthi Odukoya will be buried today.
Tags:   Babajide Sanwo-Olu   Pastor Nomthi Odukoya   Prof. Yemi Osinbajo