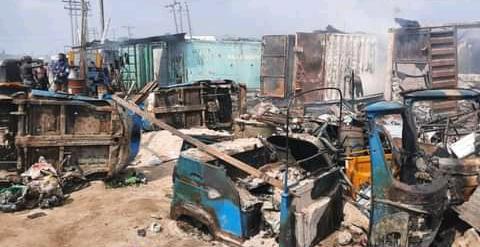 Ruins after the fire in along Dr Peter Odili road, Port Harcourt on Monday.

Residents of Port Harcourt, the capital of Rivers State are counting their loses as the city recorded two more fire incidents on Monday which added to the four fire incidents that have been recorded in the oil city in about a week.

One of the fire incidents on Monday was at Captain Amangala, Old Port Harcourt Township area while the other was along Dr Peter Odili road of the oil city.

The fire incident at Captain Amangala, according to some residents in the area, was as a result of illegally refined kerosine that exploded in one of the apartments in the area.

Some however said the fire resulted from a gas explosion in the apartment.

Some residents who spoke to journalists to said a lady in the apartment where the fire began was was seriously burnt, and was rushed to the hospital.

Another resident in the area blamed the Federal and state governments for failing to provide refined kerosine for the people, especially in the face of the increase in the price of cooking gas.

The respondent called on the government to create modular refineries to reduce the activities of artisanal refineries in the state.

Our Correspondent reports that the fire was put out by the youths in the area, but the property in the affected rooms were all razed down by the fire.

This is the sixth fire incident in Rivers state in the space of one week. Some of the fire incidents have been reported to be as a result of illegally refined petroleum products.

The second fire incident at the JDP roundabout by Peter Odili Road razed a shop with two tricycles displayed for sale, and a cash sum of about N500,000 among others

A source alleged that the fire was ignited by thugs allegedly from a nearby community who, with fuel and other dangerous weapons, had attacked a shop where metal scraps were being sold.

“After a brief quarrel with the owner of the metal scrap shop, the thugs poured fuel on the shop and set it ablaze and the fire affected other shops,” a source said.

Owner of one of the shops who identified himself as Wisdom said he just stocked his shop, having returned from Aba yesterday, just before the hoodlums allegedly invaded the area setting shops ablaze.

Similarly, on Sunday afternoon, fire razed over 200 rooms at the Elechi Beach waterfront neighbourhood of Mile One, Diobu, making it the fourth fire incident in a week in Port Harcourt.

A source said Sunday afternoon’s inferno was caused by an illegal electricity connection which sparked off fire.

Some affected residents who spoke to newsmen on Sunday said the fire started from a spark prompted by an illegal electricity connection.

They alleged that those who are responsible are always in the habit of tampering with electricity connection in the area.

They also lamented that the fire service was not available during the fire outbreak despite several calls to them.

Recall that the first fire outbreak occurred in the early hours of Sunday, November 21 at Isiokpo Street, D/Line; the second at an uncompleted building at Rumuokoro; while the third was at Nembe/Bille Jetty waterfront; with the state government blaming all three on illegal petroleum products popularly called “kpor fire”.

The Rivers Government has promised to investigate the causes of the fire incidents in Port Harcourt and environs and take appropriate action.

The Commissioner of Energy and Natural Resources, Dr Peter Medee,and the Commissioner for Special Duties, Emeka Onuwo, have separately given assurances in reaction to the regular occurrence of fire incidents.