Where were the trapped gunmen? Official lies about assault on Jos Custodial centre 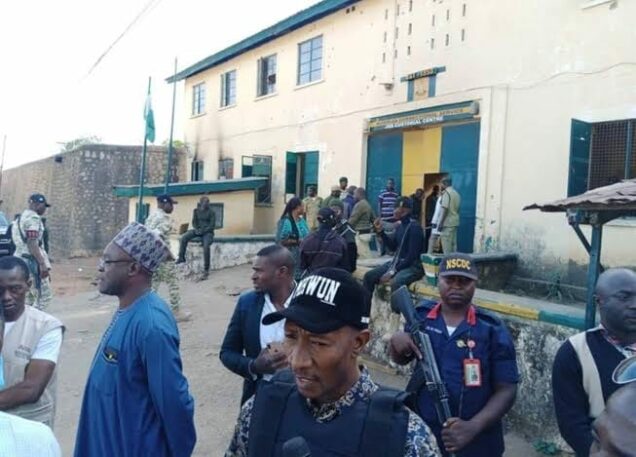 Nigerian officials exhibited their utter lack of credibility over Sunday’s attack by gunmen at the Jos Custodial Centre.

While the mass media and the many news blogs reported the assault and possible jail break, an official of the Nigerian Correctional Service, Francis Enobore issued a statement that claimed the attackers had been trapped and subdued by security forces.

Many Nigerians heaved a sigh of relief believing that a jail break had been averted and were hoping to see the bodies of the attackers or their faces paraded on television, if captured alive.

He wrote: “The Medium Security Custodial Centre in Jos, Plateau State came under attack by gunmen who reportedly stormed the facility in large numbers with sophisticated weapons.

“The invaders were said to have arrived at the Custodial Center at about 1720hrs and immediately made for the main gate where they engaged the armed squad personnel in a gun battle before breaking into the yard.

“Although they gained entrance to the yard, they are however trapped within as men from sister security services were immediately mobilised to assist the armed guards to cordon the perimeter wall and the entire area.

“Reinforcement from the response squad of the Service has also been mobilised to the centre.

“The situation is presently under control as the attackers firing power is being subdued by superior fire from a combined team of security agencies.

“Update will be made available as event unfolds”.

In between were lies fed to the media via NAN that five inmates who tried to escape were arrested.

Only the police gave a fair account of the assault, reporting cryptically that inmates have escaped and they were on a manhunt for them. The police also said they arrested eight out of the escaping inmates.

As it turned out 252 inmates out of a thousand at the holding facility bolted away to swell the 4000 plus jail breakers already on the loose from the various prisons.

As things turned out, there were no gunmen trapped or subdued inside the Jos Custodial Centre. Enobore lied.

The obverse was the case.

The gunmen with ‘sophisticated weapons’ subdued the prison security to allow 262 inmates to escape.

The genie gunmen had bolted out of the custodial centre, located close to police headquarters, before security reinforcement came.

One of the gunmen died. A prison security guard also died, along with nine unidentified inmates.

Francis Enobore, who gave a promised update said another member of the prison staff was shot in the hand and six inmates were also injured in the attack.

Enobore exploded the lie he told before by admitting that 262 inmates escaped in the melee before reinforcement could come from sister services.

He said 10 inmates have so far been recaptured, leaving 252 at large.

He said efforts were ongoing to hunt down all “the perpetrators,” who had already bolted away.

The Jos Custodial Centre at the time of the attack had 1,060 inmates, comprising 560 pre-trial detainees and 500 convicts, said Enobore.

There is no information yet about the profiles of the 252 jail breakers, whether they were being held for serious or minor crimes.