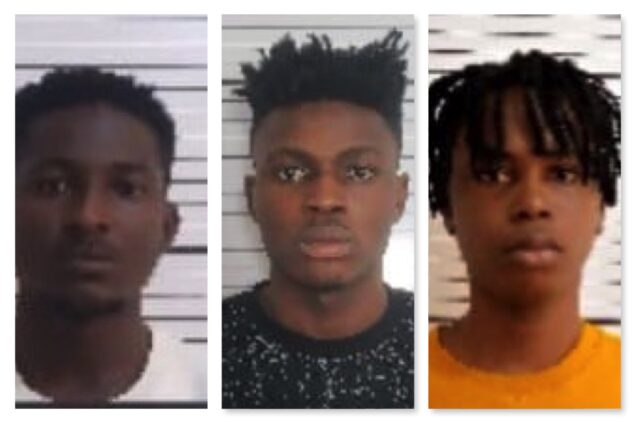 The fraudsters were convicted by Justice F.A Olubanjo of the Federal High Court Asaba for impersonation with intent to defraud.

Paul, Atiti, Osasere,Etinosa, Imariebe, Mamudu and Osaaremen were prosecuted on a one count charge of intent to defraud while Eleadi Godspower and his company, Eleadi and Sons Energy Ltd were arraigned for fraudulent impersonation.

The charge against Eleadi Godspower read: “That you Eleadi Godspower and Eleadi and Sons Ltd, sometimes between February 2018 and October 2019 at Sapele, Delta State, within the jurisdiction of this Honourable Court, did aid one Ahmef Ohwerhi (now at large) to fraudulently impersonate other persons abroad with intent to obtain the sum of $1,463,570 and thereby committed an offence contrary to Section 27(1)(b) of the Cybercrime (Prohibition, Prevention, Etc) Act 2015 and punishable under Section 22(1)(b) (iv) of the same Act”.

The charge against Etinosa read: “That you, Osamwonyi Precious Etinosa, sometimes between year 2019 and 12th September, 2021, at Benin City, Edo State within the jurisdiction of this Honourable Court, with intent to defraud, sent electronic message which materially misrepresented your identity to Yvonne Elsey, an American upon which she relied and suffered financial loss in the sum of N32,431, 814 and thereby committed an offence contrary to and punishable under Section 14 (2) of the Cybercrime (Prohibition, Prevention, Etc) Act 2015”.

The defendants pleaded “guilty” to the charge preferred against them by the EFCC, prompting the prosecution counsel, Francis Jirbo, to ask the court to convict and sentence the defendants in line with their guilty plea.

Eleadi Godspower and his company, Eleadi and Sons Energy Ltd were sentenced to five years imprisonment with an option of N1.5 million as fine.

Osasere, however, bagged five years imprisonment with the option of N500, 000 fine.

The convicts also forfeited the many assets to the Federal Government as ordered by Justice Olubanjo.

One Apple Wrist Watch and N23,182,212.97 being proceeds of crime recovered from the convicts were similarly forfeited to the Federal Government.