Nigerians charged to to see police as friends 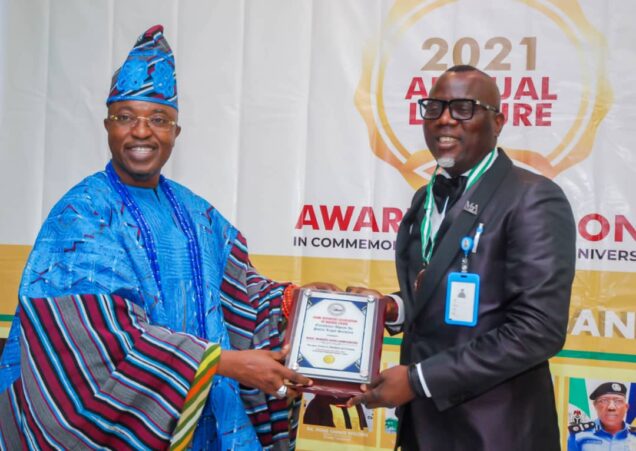 Nigerians have been charged to see men and officers of the Nigeria Police Force, as their friends and accord them all the respect.

Nigerians were also charged to provide useful assistance needed to the police in the course of keeping the country safe and free from all forms of crime and banditry.

They were advised also to relate with the police in a civil manner and see them as vital partners in curbing societal ills, instead of seeing them as a ‘combative force’.

The above advice were given by Barrister Morufu Ajani Animashaun, a Legal Officer attached to the Force Criminal Investigation Department (ForceCID) Annex, Alagbon-Ikoyi, Lagos on the Nigeria Police Force.

Animashaun, who was bestowed with the CRAN’s ‘Excellence Award In Police Legal Services’ also said “it is when the police are encouraged that the society will experience peace and development, bye and large police is a friend of the society”.

On the nation’s state of Insecurity, he called on all Nigerians to support the police and other security agencies in their bid to protect our dear nation from these miscreants and bandits.

“The security situation of the country is bad, no doubt, but the efforts of all law enforcement agencies should be commended in their bids to protect the nation in general”, he said.

Animashaun who has been in Service for 20 years, also admitted that there are some bad eggs in the system, just like other sectors of the society.

He, however, stated that there is an inbuilt effective mechanism in the police to address these recurrent issues.

He added that the Inspector-General of Police (IGP) frowns at such acts of nonchalance and sanctions erring officers who are found wanting in the course of their duties.

Reminiscing on the award, Animashaun said; “I feel so delighted and fulfilled to be found worthy of a such prestigious award. It will motivate me to put in my best more.

“I also dedicate this award to Almighty Allah, who has been so faithful and compassionate with me, to my family, the IGP, DIG ForceCID Annex, AIG ForceCID and my colleagues in both police and Legal department, for always being there to give me the needed encouragements and supports.”