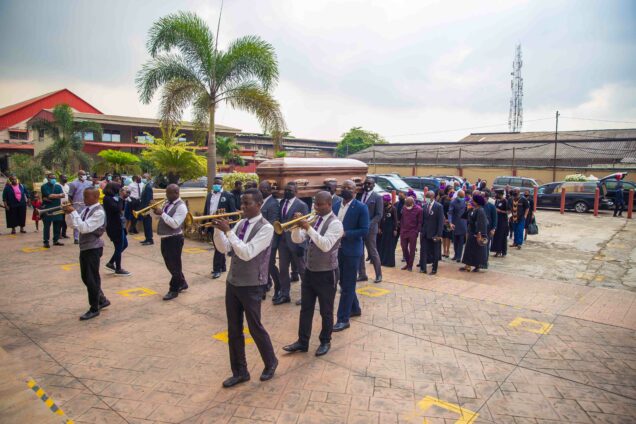 The remains of the late Pastor Nomthi Odukoya accompanied by families and friends at the headquarters of the Fountain of Life Church in Lagos, on Tuesday

The families and friends of the late Pastor Nomthi Odukoya gathered at the headquarters of the Fountain of Life Church in Lagos, to mourn her and say their final goodbyes.

The 47-year-old South African died in the United Kingdom about two weeks ago after battling cancer.

Tears flowed freely from the eyes of many who were present at the funeral services.

Pastor Matthew Asimolowo preached the word of God while the president of the Pentecostal Fellowship of Nigeria, Bishop Francis Wale Oke prayed for the Odukoya family. The Fountain f Church Choir, “The Grace Levites” led the congregations in Hymns.

The remains of the late Pastor Nomthi was transported to an undisclosed place for a private interment.

Late Pastor Nomthi got married to Pastor Taiwo Odukoya on the 5th of January 2010 five years after he lost his first wife, Pastor Bimbo Odukoya in the Sosoliso plane crash of 2005.

See some photos below;