Bawa to corps members: Be foot soldiers of anti-graft war 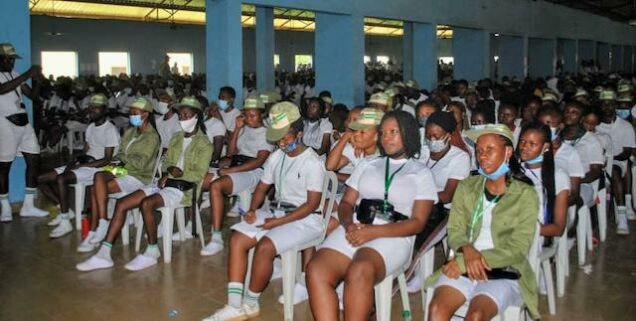 The corps members in Port Harcourt

Chairman of the Economic and Financial Crimes Commission, EFCC, Mr. Abdulrasheed Bawa has called on members of the National Youth Service Corps, NYSC, to take ownership of the war against financial crimes, to save the nation.

He gave the charge on Wednesday, December 1, 2021 in Port Harcourt, Rivers State while addressing Corps members at the NYSC’s Orientation camp in Nonwa- Gbam.

According to him, only public ownership of the anti- graft war can drive the requisite commitment to tackle the menace of corruption.

” As young Nigerians, the EFCC expects you to align yourselves with the anti- corruption war by being change agents, good campaigners against corruption and by publicly owning the crusade. It is only public ownership of the war against corruption that will deepen your commitments to the anti- graft war”

Bawa was represented by Head, Public Affairs Directorate of the EFCC in the Port Harcourt Zonal Command, Assistant Commander of the EFCC, ACE Dele Oyewale.

The EFCC boss enjoined the Corps members to impact their places of Primary Assignments positively through zero tolerance for corruption. “Your integrity and transparency will endear you to other Nigerians. You must reject corruption in words and deeds”, he said.

He specifically tasked them on whistleblowing, stressing that they must not cover up any suspicious cases of corruption in their immediate environments.

“Every good Nigerian must be a whistleblower. I charge you to always expose compromises and corrupt tendencies in your immediate environment. When you see something, you must say something and the EFCC will surely do something”

He gave the charge in a lecture titled “EFCC and The Role of the Youths in Curbing Corruption” delivered at the National Youths Service Corps, NYSC, orientation camp in Iyana Ipaja, Lagos.

He said: “We encourage you to serve as role models by shunning all acts of corruption and economic crimes.

“The fact that the rate of unemployment is high should not be an excuse to resort to crimes. Acts of criminality might deliver wealth in the short term, but ultimately there will be misery and gnashing of teeth.

“We are calling on youths to embrace hard work and shun crimes. Yahoo-Yahoo is not a sustainable way of life.”

Bawa, who expressed his gratitude to the leadership of the NYSC for the support the Commission had enjoyed from the corps members over the years, also sought the strengthening of the existing collaboration between the NYSC and the EFCC in the fight against corruption and economic and financial crimes.

In Kwara State, the EFCC boss admonished the Corps members to be foot soldiers in the anti-graft fight adding that the youths are critical stakeholders in the quest to find a lasting solution to the problem of corruption in Nigeria.

Bawa’s admonition was contained in an address delivered on his behalf by the Head, Public Affairs Department, Ilorin Zonal command of the Commission, Ayodele Babatunde, at the NYSC Orientation Camp, Yikpata, Edu Local Government Area of Kwara State.

He urged the corps members to be shining examples to others and champion the anti-corruption fight.

“Apart from the fact that the youth are considered as leaders of tomorrow, most economic crimes, especially cybercrimes are committed by young people. It therefore follows that young people must not be mere spectators in the anti-graft campaign. Rather, they should actually be the foot soldiers leading the mass rout of corruption and economic crimes out of our land,” he said.

In Kaduna, Nana Fatima Abubakar of the Public Affairs Directorate, Kaduna Zonal Command delivered the Chairman’s message to corps members, urged them to take advantage of the EFCC/NYSC CD group and join the advocacy arm of the Commission to help mould kids in schools across the country through the integrity clubs.

He said the youths by virtue of their age and passion, must consider themselves as partners with EFCC in ridding the country of corruption.

In Enugu, DSE Bethel Ude, the Head of Public Affairs of the Enugu Zonal Command, who was at the Batch C, Stream 11 National Youth Service Corps’ (NYSC) Orientation Camps in Awgu , Enugu State, urged the corps members to harness their youthful energies for public good.

“We are convinced that all hope is not lost in the effort to bring this country back from the brink. As dynamic young men and women, our desire is to harness your intelligence and energy for greater public good in your areas of primary assignments,” she said.

Similar messages were presented to corps members across the country by officials of the Commission.