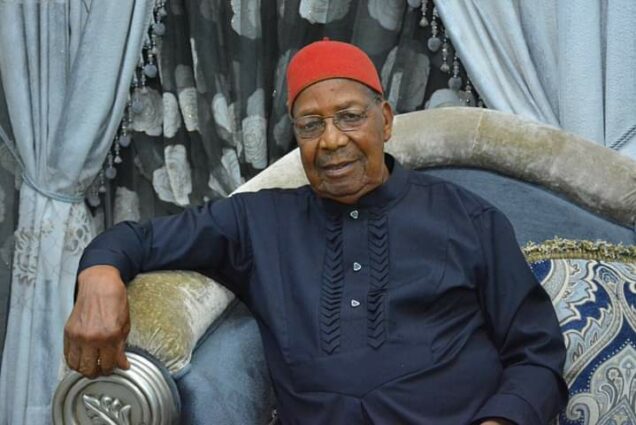 An elder statesman, Chief Mbazulike Amaechi, 92, has urged agitating Igbo youths, such as IPOB to respect his age and stop the wanton killings and destruction of property in the South East Zone.

Amaechi made the appeal on Wednesday in Abakaliki while briefing newsmen meeting with Gov. David Umahi of Ebonyi in closed doors.

The elder statesman said that he was in the state to brief the governor as the Chairman of the South East Governors Forum on his efforts to stop the incessant violence in the zone especially by youths.

“I led a delegation of Igbo leaders to President Muhammadu Buhari on the growing trend of violence in the country especially in the southeast zone.

“He was happy with the visit and we are expecting positive results because peace and reconciliation cannot be achieved with violence,” he said.

The First Republic Minister regretted the reported killing of policemen and civilians in Ebonyi and other parts of the country and called for an end to such carnage.

“I plead with all agitating groups both known and unknown to give peace a chance for full restoration of security to the zone and the entire country.

“I am the only surviving minister of the First Republic and plead that my age should be respected.

“I should be assisted to make peace in the zone and country before I join my maker.

“Youths are presently witnessing a period when the Naira has no value, passengers disembark from their vehicles to cross security check points among other issues,” he said.

Amaechi recalled the events of the 1979 and 1999 general elections in the country and noted that Igbo missed the opportunities of clinching the presidential positions on both occasions.

“I believe the Igbo have qualified and respected individuals who can clinch and acquit themselves creditably as the country’s president.

“”When Igbo emerge as the candidates of the respective parties, we would support whoever wins,” the nonagenarian said