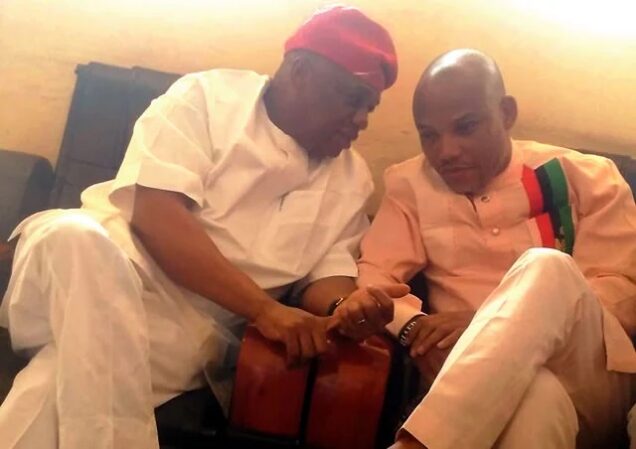 The Chief Whip of the Senate, Senator Orji Uzor Kalu, said he was very disappointed with the comments made by Barrister Ifeanyi Ejiofor over his visits to Nnamdi Kanu.

Ejiofor had claimed that Kalu broke the Department of State Service protocol when he visited the leader of the proscribed Indigenous Peoples of Biafra, Nnamdi Kanu, on Monday.

“It is of serious concern that the visit was conducted without strict adherence to the court-ordered guideline, but more condescending that the visit later became a subject of political gimmicks,” said Ejiofor.

However, Kalu, in his response on Wednesday, said Barrister Ejiofor tried to misinterpret and misinform the public about his visit to Kanu.

The former governor of Abia State also said the picture that was circulated with the story of his visit was not a recent one and that it was not taken on Monday.

Kalu said: “It has come to my notice, the statement issued by one of the counsels to Maazi Nnamdi Kanu, Barrister Ifeanyi Ejiofor, in which I am very disappointed in him.

“He rightly acknowledged that I was scheduled to visit his client and at the same time, claimed that I violated the guidelines stipulated for visiting his client.

“According to him, he was supposed to be present at the 2 pm meeting on Monday.

“Several people, including Barrister Ejiofor, have tried to misinterpret and misinform the public about my visit to my brother, Nnamdi. I also read a report stating that I took pictures with Nnamdi and also tweeted same on my Twitter account.

“For the records, the Department of State Services (DSS) did not break any protocol during my visit as I fulfilled all the requirements expected of me before I saw Nnamdi. The DSS affirmed that I cannot see Nnamdi without the application of his lawyers which I diligently did.

“Probably, Barrister Ejiofor may have expected me to arrive at 4pm for a scheduled 2pm visit. What many people refer to as “African time” is not my style. I strictly keep to time and it is a discipline I have upheld since my childhood.

“I arrived at the DSS headquarters at 1:50 PM; went through the necessary protocols and met Nnamdi at 2:17 PM. I stayed with him until 2: 57 PM. Even though he asked that I stayed longer but I had to leave because of other engagements.

“During my visit to Nnamdi, I did not even take my mobile phone along and no photograph was taken. The photograph people are circulating was the one I took with him when I visited him at the Nigerian Correctional Service Medial Security Custodial Centre, Kuje in 2016 and later, his parents in 2017. My Twitter account has also been inactive.

“I don’t also know if Barrister Ejiofor is aware that Nnamdi is not under compulsion to see anyone. If he didn’t want to see me, he could have as well declined, but he was glad to see me and also expressed deep appreciations.

“Ejiofor’s anger seems to be borne out of vexation of not being around to listen to our conversations.

“He sounds like someone who is a beneficiary of the crisis. People like him may not see the economic damage the Southeast is experiencing because of the weekly sit-at-home. He does not understand that people can protest in peace without disrupting economic activities and going violent. He does not understand that there are people whose livelihood solely depends on daily hustle. If you have people’s interests at heart, you should as well consider their security, economic prosperity, and peaceful livelihood.

“I call on Ejiofor to be patriotic, rise above primordial and pecuniary interest and put the interest of the people of the Southeast and the country first.”