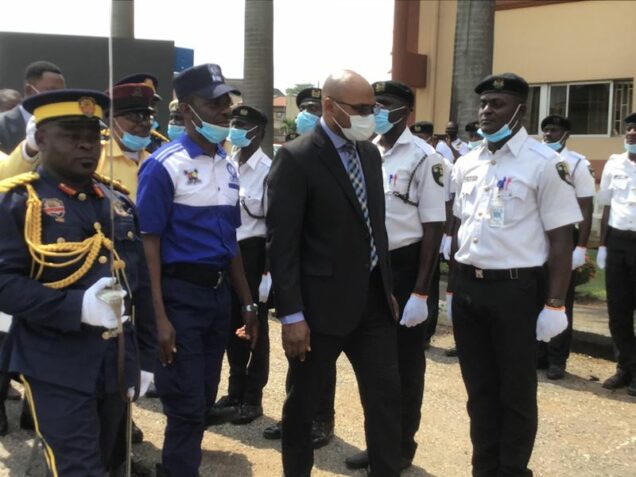 Permanent Secretary, Chief of Staff, Wale Musa inspecting guard of honour at the passing out parade of trained law enforcement officers in Lagos. With him is LETI CEO, Dr. Adegboyega Bajulaiye

The Lagos State Government on Thursday completed the training of over 5,000 law enforcement officers in the state.

The officers were trained in batches of 23 spanning the space of three months. They were trained at the Law Enforcement Training Training Institute, LETI, P.S.S.D.C. Yard, Magodo, Lagos.

The passing out parade was held at LETI yard, P.S.S.D.C. Magodo on Thursday.

Speaking at the event, Governor Babajide Sanwo-Olu said the training of the officers was meant to enhance their performance in the discharge of their duties.

The governor, who was represented by the Permanent Secretary, Chief of Staff, Olawale Musa said his administration was committed to continuous retraining of staff.

According to him, his administration was committed to ensuring free flow of traffic, ensuring maintenance of healthy environment and boosting security in the state.

Sanwo-Olu said his government placed high premium on human capacity development which has placed the state above others in Nigeria and beyond.

He charged the law enforcement officer to be civil in the discharge of their duties, warning that his administration would not condone intimidation and harassment of citizens by officers.

Sanwo-Olu added that their actions must be guided by the exposure the training had exposed them to.

Speaking at the event, Attorney General and Commissioner for Justice, Moyosore Onigbanjo said the administration of Sanwo-Olu, from inception had never minced words about his unwavering commitment to give matters of security and safety topmost priority.

Onigbanjo, who was represented by Mr. Ahmed Oyenuga, said it was in the quest to ensure that not only is Lagos safe and secure but also to make Lagosians feel safe and secure that made the state government to make the sixth pillar of its THEMES agenda Security and Governance.

He said the governor remained committed to the issues of their welfare, while enjoining them to justify the huge investment of Lagos State Government on their training by providing efficient and effective service to the people of Lagos.

Chief Executive Officer/Head of LETI, Dr. Adegboyega Bajulaiye said the mandatory training is an indication of the completion of the training that spanned three months for over 5,000 officers divided into 23 batches.

He said the training was important because it represented a privilege for staff to grow their knowledge base and improve their job skills to become more effective and efficient in the work place.

Bajulaiye stated that the agency made bold to say that the Lagos State’s investment committed to the training was worthwhile as its impact was mentioned and recognized by radio callers and the public.