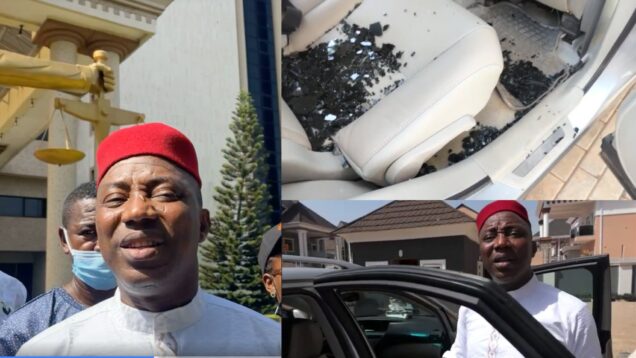 Omoyele Sowore was attacked by thugs as he made his way out of the Federal High Court in Abuja on Thursday.

Sowore had visited the court on Thursday morning to attend the emergency hearing in a case involving the leader of the Indigenous Peoples of Biafra (IPOB), Nnamdi Kanu.

Sahara Reporters reported that Sowore was attacked by the thugs immediately he stepped out of the court.

According to the report, the thugs rushed towards him and started throwing stones at the activist and his entourage.

His car was also damaged during the attack.

However, Sowore took to Twitter to accuse the Department of State Services (DSS) as the masterminders of the attack.

“Today again, the DSS mobilized thugs to attack and kill me for attending Mazi Nnamdi Kanu’s trial at the Federal High Court in Abuja. They came well prepared, however, we cannot be deterred. The struggle continues,” Sowore stated.

Watch the video shared by Omoyele Sowore below:

Thursday’s attack was not the first time Sowore was attacked during Nnamdi Kanu’s trial.

He was attacked by thugs on November 9 at the same court.

Sowore was also attacked in October this year, at the entrance of the same court after he was denied entry by policemen during Kanu’s trial.

It took the intervention of some journalists covering the event to rescue the activist from his attackers.