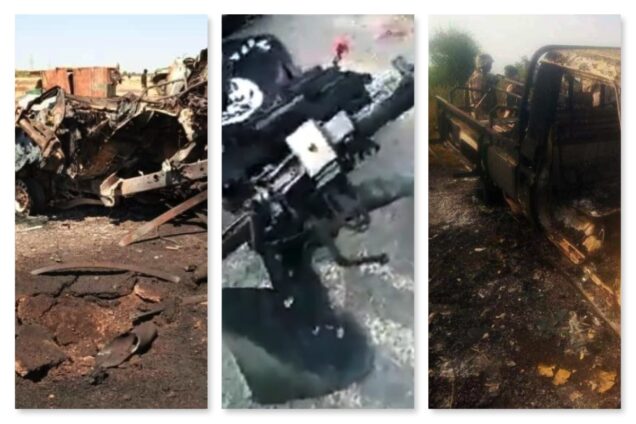 ISWAP equipment destroyed by the military in Rann

ISWAP terrorists have given the Nigerian military another heartbreak, after two officers and five soldiers were killed in an encounter at the military base in Rann, Borno State early on Friday.

Although neither the Defence Headquarters nor the Nigerian Army has issued a statement, multiple sources confirmed the losses.

A commanding officer, his lieutenant and five soldiers were lost.

All have not been identified yet.

However, the terrorists also lost dozens of their men, put at about 24.

Reports said the terrorists attacked the Rann military camp in Rann, in Kala Balge local government area, in three trucks at roughly 1:30 am, firing sporadically for an hour.

When the shooting stopped, the soldiers went into the town and were killed in an ambush, the sources said.

“Those that had hidden inside the town ambushed and killed the captain, lieutenant and five others soldiers,” a military source told Reuters..

“The terrorists could not subdue the gallant troops, during the crossfire. At the last count this morning, we recovered 24 of their dead bodies killed in the gun battle, while the rest fled with injuries.

“We also recovered huge sophisticated weapons apart from their gun trucks that were completely destroyed by airstrikes,” PR Nigeria reported.