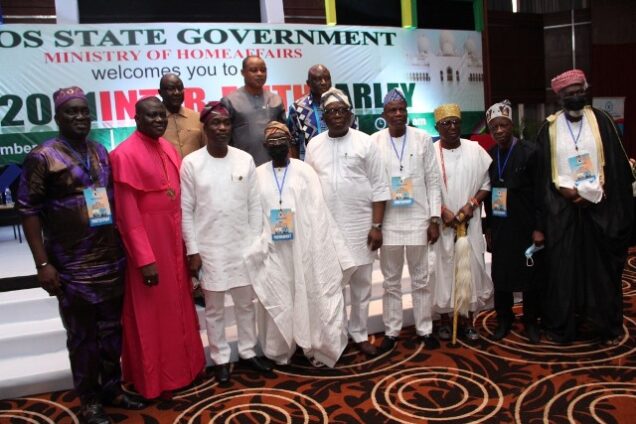 Lagos State Governor, Mr. Babajide Sanwo-Olu has called for moral revival in the nation, if it will attain peace and security necessary for development.

The Governor, who was represented by the Deputy Governor, Dr. Kadri Obafemi Hamzat at 2021 Inter-Faith Parley, which was held today, at Victoria Island, stated that it was pertinent to ensure that the youths were not misled into towing the wrong path, adding that parents especially needed to pay close attention to the morality of their children and wards.

Sanwo-Olu stated that “the erosion of moral values in our society today has become a source of concern to everyone and Government across all levels”.

While commending the religious leaders for their continuous support, the governor admonished them all to continue to preach love and peace, among people and also to develop tolerance for others irrespective of differences.

He reassured the clergies of his administration’s commitment of a responsive and responsible governance which would continuously create an enabling environment for peaceful co-existence amongst various religious followers and worship centers.

Commenting on the tribunal’s report on the ‘EndSARS’, the governor urged Nigerians to familiarize themselves with the government’s white papers on the report.

He added that rather than peddling falsehood, comments should be made on the basis of right information.

Commissioner for Home Affairs, Prince Anofiu Elegushi urged religious leader to use their weekly sermon to promote unity, peace and love for a peaceful and harmonious co-existence.

He stressed that issues of State importance should be accorded priorities in the teachings that they reeled out daily, adding that “our weekly sermon on unity, peace and love must resonate a weekly basis while obedience to rule of law and commitment to our Lagos project must remain sacrosanct”.

Elegushi also admonished the religious leader to have a more robust relationship that must be consolidated on the gains of collectiveness.

He disclosed that the Sanwo-Olu’s administration expected the religious leaders to continue to close ranks and check the excesses of exuberant preachers who find it convenient to create enmity among the people.

Earlier in his presentation, the National Director, Fishermen Maximum Output Ministries/ National Director, Education, Dialogue & Value System Initiatives, Rev. Kehinde Babarinde noted that religious leaders must be the guide and critic of the state and not its tools.

He added that in order for religious leaders to remain the conscience of the state and possess the power to commend and correct, their roles must be played with the highest sense of responsibility.

He said “if the religious body does not recapture its prophetic zeal, it will become an irrelevant social club without moral or spiritual authority”

Babarinde urged clergies to synergise with both Non-Governmental Organisations and state government to look for a way of rehabilitating the miscreants in Lagos and work out plans for the restoration of the state’s value system.