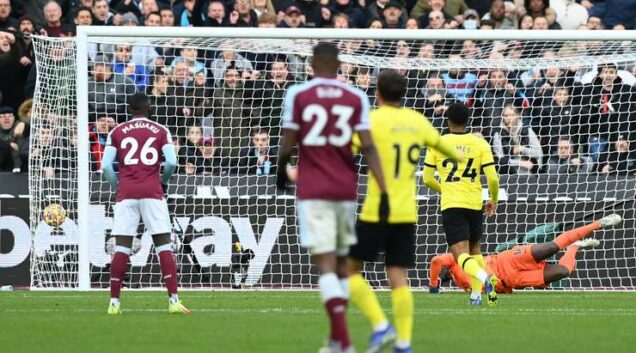 Chelsea crumbled to a 3-2 defeat at West Ham on Saturday to stumble in the race for English Premier League title.

If Liverpool and Manchester City win today, Chelsea will go third after occupying top spot for some weeks.

West Ham came from behind twice to stun the league leader and one of the favourites for the title.

The visitors had opened scoring on 28 minutes from a Thiago Silva’s goal.

The Chelsea defender got his head on a Mason Mount corner kick and planted a long-range header goalwards. The ball went in off the right post.

West Ham equalised on 40 minutes from the penalty spot.

Manuel Lanzini buried the ball into the left of the net, giving goalkeeper Edouard Mendy no chance.

Four minutes later, Mason Mount showed good composure inside the box to fire a first-time shot into the bottom right corner to give Chelsea 1-2 lead.

West Ham equalised 11 minutes into the second half as Jarrod Bowen was teed up on the edge of the box by Vladimir Coufal, and his shot went into the bottom left corner to make it 2-2.

Arthur Masuaku won it for West Ham three minutes to duration time, as he sent a lofted ball into the box which was totally misjudged by the keeper and defence and ended up in the back of the net.