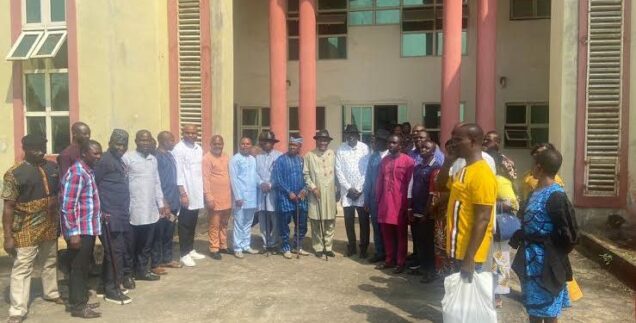 The KEFFES Rural Development Foundation (KRDF) on Friday suspended three chiefs over their alleged role over a botched effort to derail the group.

Chief Christopher Tuduo, an Ex-officio member, who announced the suspension said the action was in accordance with the rules of the foundation.

According to Tuduo, the suspended chiefs are members of the foundation who represent their communities on the board of KRDF.

Tuduo said they were suspended for failing to appear during the enlarge foundation’s Board of Trustee meeting to explain their alleged involvement in the lingering crisis within the organisation.

The chiefs were accused of backing the decision of the Timiebi Amadein group to attempt to change leadership through the back door.​

Tuduo explained that the enlarged meeting of the foundation’s Board of Trustee (BOT) was presided over by the BOT Secretary, Israel Igbousa.

He said that the board further resolved that the communities which the suspended chiefs representatives should deliberate and forward replacement to fill the vacant seats created by the disciplinary measure.

“The meeting is actually borne out of the last gathering to reach a decision on the crisis rocking the foundation.

“Today’s meeting is one agenda meeting but unfortunately, the three BOT members that were supposed to be here today to respond to questions that bordered on the role they played in the lingering crisis were unable to make it but were represented by some community chiefs.

“So, the general stakeholders, which is the General Assembly of the council, met and decided that the three BOT members be suspended from the board.

“It must be clear that their communities are not suspended but the individuals are suspended. We expect the communities concerned to write to the council on what they want to do with them and council will follow suit.

“Also, the council has nominated me, Christopher Tuduo to act on behalf of the BOT members.

“They did so because they are elderly and weak in going about RDF Business. The move is novel and I was surprised, but I promised that I will take responsibility.

The Bayelsa High Court in its ruling in a suit brought before it by Amadein nullified the chairmanship election of the KRDF and ordered a fresh election.

However, the KRDF entered an appeal and the appellate court ordered a stay of execution of the decision of the lower court pending the determination of the appeal.

But the claimant attempted to inaugurate a rival executive.