Dapo Abiodun hit by another resignation 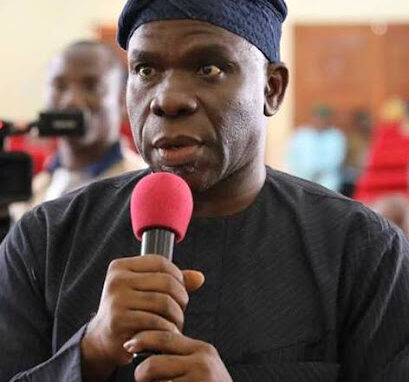 Muyiwa Oladipo, former speaker of the Ogun State House of Assembly 1999-2003, has resigned from the government of Dapo Abiodun.

He was acting as a consultant to the governor prior to his resignation.

Oladipo’s resignation comes less than a month after the former Attorney General and Commissioner for Justice in Ogun State, Akingbolahan Adeniran, left the Ogun state cabinet.

The consultant resigned in a letter dated December 2, 2021, and addressed to Abiodun through the Secretary to the State Government.

He said his resignation was with immediate effect.

He thanked the governor for the opportunity given to serve the state once again.

Oladipo, who represented Sagamu in the House of Assembly from 1999-2003, did not state his reason for resignation.

“I hereby tender my RESIGNATION as Consultant with immediate effect.

“I further thank you for the opportunity given me to continue in the service of Ogun State which I started way back in 1999 as the Speaker of the State House of Assembly.

“The good Lord will continually guide us aright, may we not STUMBLE.” 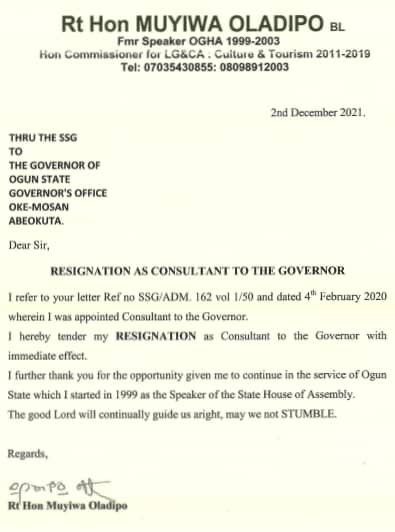 In an interview after his resignation, Oladipo who was a two-term commissioner with former governor Amosun said he was within his right to resign and move on with his life.

“At a point in life, you get to a stage when you will decide to move on with your life. So, I decided to do that. Don’t forget that I was once a Speaker, later I became a two-term Commissioner and also he (Abiodun) appointed me as a Consultant.

“I am a philosopher, a barrister and a historian as well.”

He also confirmed that he has returned to the Amosun camp of the Ogun All Progressives Congress (APC).

“Yes, that’s where I left. There is nothing strange in going back to where you left”, he said.