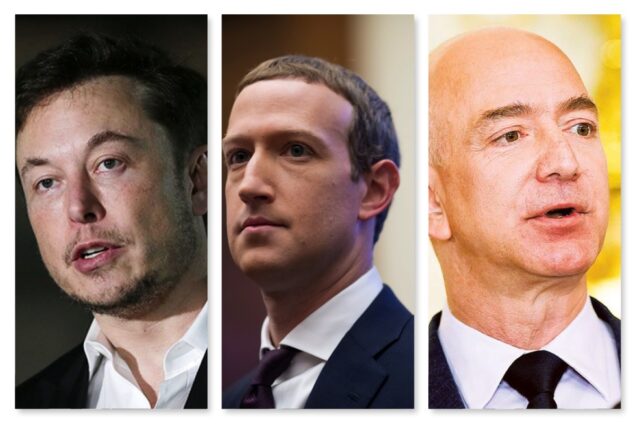 Tumbling tech stocks on Friday wiped out tens of billions of dollars from the net worth of some of the billionaires, amid fears of inflation and economic tightening.

According to Bloomberg Index, Elon Musk’s net worth fell by $15.2 billion on Friday – the most among tech billionaires – after Tesla Inc. shares extended losses.

That leaves Musk’s fortune at $268.9 billion, which is still up 72 per cent for the year, according to the Bloomberg Billionaires Index.

Jeff Bezos’s net worth dropped by $2.7 billion as shares of Amazon.com Inc. declined 1.4 per cent in New York.

Mark Zuckerberg’s wealth dropped $1.3 billion to $114.7 billion with his recently rechristened Meta Platforms Inc. on the cusp of a bear market after an almost 20 per cent fall from its recent peak.

Markets are still reacting to higher inflation and the likelihood that the Federal Reserve will push forward with faster tapering of asset purchases.

The top 10 US technology billionaires combined hemorrhaged $27.4 billion in wealth, according to the index.