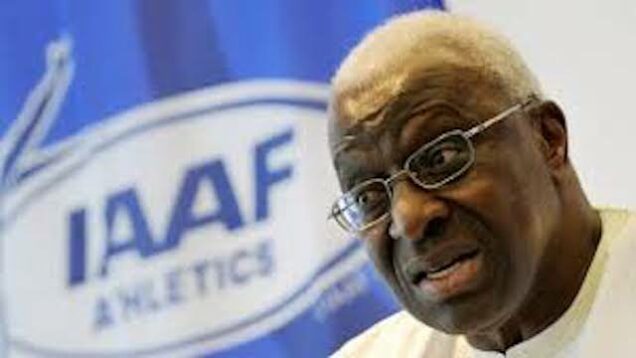 Lamine Diack, the former head of International Association of Athletics Federations (IAAF) died at home in Senegal on Friday at the age of 88, his son said.

Diack led the IAAF from 1999 to 2015, making him one of the most powerful people in athletics.

But he was later found guilty of running a clique that covered up Russian doping in return for millions of dollars in bribes.

A French court sentenced him to four years in prison in 2020, but he was never jailed.

He remained under house arrest in France and was later released on bail, allowing him to return to Senegal.

“He died at home around 2 a.m. of a natural death,” his son, Papa Massata Diack said.

Diack’s lawyers had previously said he was in poor health and would die in jail if sentenced.

Born in Senegal’s capital Dakar, Diack attended university in France where he was a champion long-jumper in the 1950s.

Afterwards he coached football in Senegal and helped manage the national team, which allowed him to transition into politics.

Diack was mayor of Dakar from 1978-1980, and later served as senior vice president of Senegal’s National Assembly.

As IAAF president, he was found guilty of soliciting bribes totalling 3.45 million euros ($3.9 million) from athletes suspected of doping to cover up test results and let them continue competing, including in the 2012 London Olympics.

He paid off other IAAF officials to aid with the cover up, and also accepted Russian money to help finance Senegalese leader Macky Sall’s 2012 presidential campaign, the court found.

Diack’s son, Papa Massata, was at the heart of the scandal alongside him but fled to Senegal and was tried in absentia.

He was given a five-year jail sentence last year, which his lawyers said they would appeal.

French investigators have said that Papa Massata was at the centre of a years-long corruption probe spanning Europe, Asia and the Americas, which included the awarding of the 2020 Olympic Games to Tokyo and the 2016 Games to Rio de Janeiro.