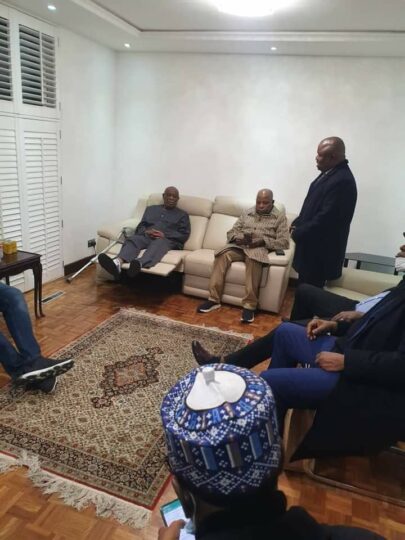 Osoba who said this while playing host to a group of Nigerian senators in London where he is recuperating after undergoing knee surgery on Saturday declared support for use of direct primary as a means of selecting candidates of all political parties as contained in the newly passed Electoral Amendment Act.

The former governor noted that President Buhari submitted himself to direct primary in 2019 in all the wards in Nigeria and also subjected himself to a National Convention to ratify his election at the primary and heavens did not fall.

He said he once confronted the President about the issue of direct primary before the 2020 Edo governorship election.

“And quote me, I had cause to tell him at our National Caucus during Edo election issue that “Mr. President, if you can subject yourself to direct primary and national Convention, I do not see why anybody should be afraid of direct primary.

“I said this to him and we must be honest when we are talking to our leaders. That is why I believe that the President having been a product of direct primary will sign the law for direct primary” Chief Osoba stated.

Osoba added that the use of direct primary to select candidates is also part of the presidential system of government Nigeria is practicing.

“In the case of direct primary, we are running a presidential system of government patterned after that of the USA. It is direct primary in USA that we copied. Why are we selective ?

“If we don’t want direct primary, then let us go back to parliamentary system like India where party caucuses select candidates. We cannot be selective on some aspects of the presidential system that we practice while jettisoning what is its democratic content.

“I am confident that the President, as a product of direct primary, will do the right thing. I want to commend all of you. We need to democratize. The idea of ‘we’ governors handpicking should stop.

“Let the people have a say. I commend the 9th National Assembly and appeal to the president in the interest of the country and democracy to sign the new electoral law” Chief Osoba stated.

Speaking during the visit, Senator Solomo Adeola, the Chairman of the Senate Committee on Finance said Senators were in London for an assignment and decided to pay Osoba a get well quick visit and tap from his wealth of experience needed as Nigeria forges ahead in difficult times.

Adeola added that it is gratifying to see that the former governor is recovering quickly from his surgery as evidenced in his personally coming to receive his visitors at the door from the first floor and going back up with them to the sitting room upstairs.