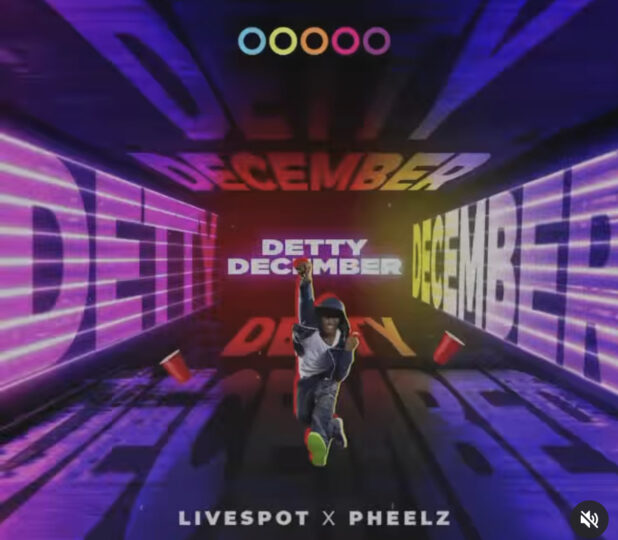 Livespot 360 and multi-award-winning producer Pheelz have just unveiled the theme song for “Detty December”, the now-world-famous December festivities in Nigeria.

Titled “Detty December”, the upbeat record is laced with a good energy that instantly fills your soul and reminds you to step out and soak in the beautiful joy that the year-ending month of December brings.

The easily relatable lyrics in Detty December sums up how most Nigerians feel as the year comes to an end.

“Detty December’’ by Livespot360 and Pheelz is the official soundtrack for Livespot X Festival, a 6-day multi-sensory pop culture experience taking place from December 16 to December 21 in Lagos, Nigeria.

Livespot360 revealed that the Livespot X Festival will give Nigerians an exciting end to the year while being fully compliant with the current pandemic era.

The concert series, which is targeted at a diverse audience, will feature concert days tailor-made to suit different categories of attendees with exciting multi-sensory experiences and several established artists billed to perform.

According to CEO, Livespot360, Deola Art Alade, the 2021 edition of Livespot X Festival will be a “multi-day hybrid convergence of everything X-traordinary, X-citing and X-clusive, that celebrates urban pop-culture.

Livespot360 is the brains behind some of Nigeria’s biggest and most iconic entertainment events such as Livespot X Festival with Cardi B, Love Like A Movie with Ciara, Kelly Rowland and Kim Kardashian and Born In Africa Festival (BAFEST), to name a few.