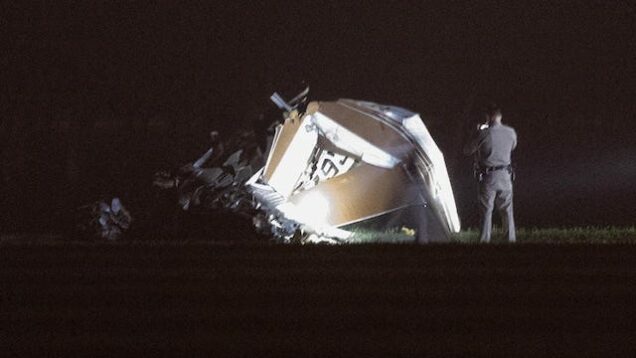 Four yet-to-be identified people have died in a plane crash during heavy fog in central California.

The single engine plane crashed less than four minutes after takeoff from a small airport in Visalia.

The Federal Aviation Administration said there were four people aboard the 1966 Beechcraft Bonanza.

The victims have not been identified.

However Visaliatimesdelta.com reported that the plane with the tail number N7933M is registered to David Chelini out of Sacramento.

It’s not immediately known where the plane was headed.

After the crash, first responders took some time to locate the wreckage due to the dense fog in the area.

Photos of the wreckage show a crumpled cabin and debris in front of an orchard, near the Visalia Water Reclamation Facility on Avenue 288.

“It was dark. At the time, it was much foggier,” Cox said. “We circulated the area with personnel until we found it (the wreckage).”

The FAA and the National Transportation Safety Board will investigate.