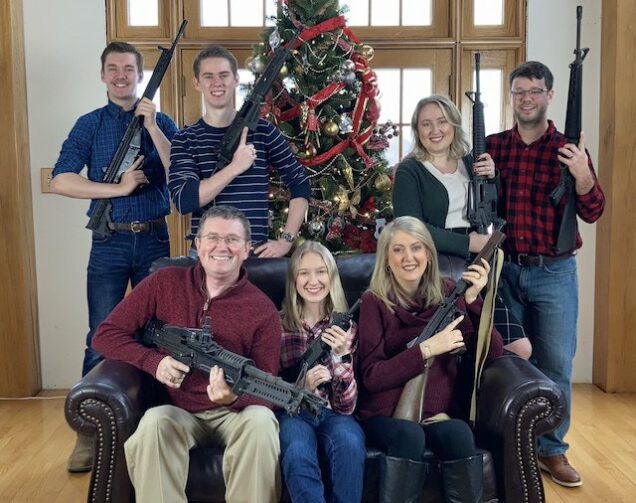 God save America! That must be the silent prayer of those opposed to America’s gun culture after U.S. congressman, Thomas Massie tweeted a Christmas picture of himself and family, smiling and posing with an assortment of guns.

Massie, who represents a solidly Republican district in Kentucky, posted the picture of himself and six others holding firearms resembling an M60 machine gun, AR-15 semi-automatic rifle and a Thompson submachine gun.

Some attacked him for being insensitive, flaunting a family mini armoury.

“I’m old enough to remember Republicans screaming that it was insensitive to try to protect people from gun violence after a tragedy,” Yarmuth wrote on Twitter, apparently referring to calls for gun control laws.

“I promise not everyone in Kentucky is an insensitive asshole,” he added.

”If you are running against this a-shole please contact me I will give you dough”.

Fred Guttenberg whose daughter Jaime was killed in the Parkland School shooting posted a counter Christmas family photo and said:

“Since we are sharing family photos, here are mine. One is the last photo that I ever took of Jaime, the other is where she is buried because of the Parkland school shooting.

‘The Michigan school shooter and his family used to take photos like yours as well’.

@rkelly2277 posting as Venture Capital compared Massie’s family photo with those of terrorists in Nigeria, Somalia and other places.

Another commenter wrote: Hey, Kentucky, this is the Christmas card your POS congressman released within days of yet another school shooting. Another national embarrassment brought to you by the MAGAt party. Congressman, Thomas Massie, R, P.O.S.Shameful, despicable and disgraceful.

Adil Ray, a British comedian and actor, also criticised Mr Massie and wrote: “Last year in the US over 5,000 children were shot.

“Over 1,300 died. Yet a Republican politician decided this is the festive photo. Now imagine, if this was a photo of a black or Muslim family this Christmas.

“This is what a White Privileged Christmas looks like. Disgusting.”

“I don’t have the deranged brain of a leftist. Can somebody explain to me how they worked out that the Michigan school shooting is
@RepThomasMassie’s fault because he shared a picture of him and his family holding legal fire arms?”

Todd Starnes, a podcaster described the Massie family photo the best Christmas photo ever. He then doubled down by saying:

“If more families were armed like @RepThomasMassie – there would not be as many home invasion robberies in California. Just saying…”

Jonathan van Norman, a campaign manager for Massie, did not immediately reply to a request for comment via Twitter.

The shooting in Oxford, Michigan – in which four teenagers were killed by Ethan Crumbley and a teacher and six other students were wounded – was the latest in a string of sometimes-deadlier incidents that have prompted fierce debates over school safety, gun control and gun rights.

In 2021 there were at least 144 incidents of gunfire on school grounds, resulting in 28 deaths and 86 injuries nationally.