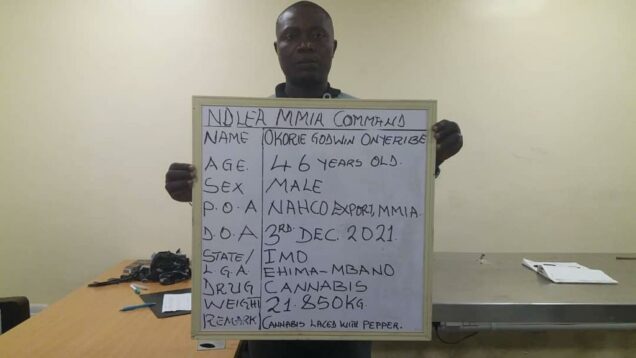 A statement issued by NDLEA’s spokesman, Femi Babafemi on Sunday said the suspected was arrested at the Murtala Muhammed International Airport, MMIA, Lagos.

He said Onyeribe attempted to smuggle the drugs weighing 21.85kg concealed in foodstuff to London, UK.

“He was nabbed at the NAHCO export shed of the airport on Friday 3rd December,” Babafemi said.

Meanwhile, the NDLEA spokesman said while the duo of Praise Emmanuel and Aminu Aliyu were arrested with 228kg cannabis in Kano, operatives in Taraba stormed cannabis farms in Changso village, Kurmi LGA, located on the mountains between Nigeria and Cameroon, evacuated 364kg of the illicit drug and set the rest on fire.

“Equally, ThankGod Danladi who has just finished a jail term in October was arrested on Wednesday 1st December with 67kg cannabis in another raid in the state.

“In Niger state, operatives intercepted a commercial bus with 215kg cannabis concealed in a false bottom and side door of the bus, along Mokwa – Jebba road.

“Two suspects; a driver and his conductor arrested claimed they loaded the consignment in Ogere, Ogun State and were heading to Sokoto as their final destination.

“In Delta state, a lady Tina Ujene was arrested in Ibusa with 1.1kg cannabis while a follow raid on her suppliers home led to the recovery of 54.7kg of the same substance. Different quantities of Cannabis, Methamphetamine, Cocaine, Heroin, Diazepam and Exol-5 were seized in raids at AP- Eleme and Garki, Oil Mill areas of Port Harcourt, as well as Lewe and Kadiri in Gokana LGA, Rivers state on Friday 3rd Dec. In Ondo state, a 72-year-old Emmanuel Akanbi was arrested at Odofin camp, Uso, Owo LGA with 2,050kg cannabis,” Babafemi said

“He charged them along with their colleagues in other commands to constantly focus on raising the bar of their achievements until the last gram of illicit drug is taken away from every community in Nigeria,” he added.