Madrid extend lead on the table 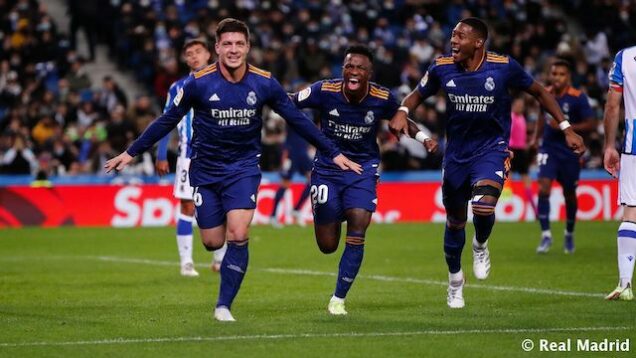 Real Madrid stretched their lead on the league table to eights points on Saturday after beating Real Sociedad 2-0 at the Reale Arena.

Once again, Vinicius Jr. was on song in giving the Carlo Ancelotti side victory, on a day that the defending champions Atletico Madrid fell to Mallorca 1-2.

The Whites once again had to dig deep in what was another stern test, especially in the first half, against a Real Sociedad side who are fighting it out for a place in the Champions League.

And in a game of such magnitude, it didn’t take long for the visitors to go close to opening the scoring.

First it was Vini Jr., with three minutes on the clock, after pressure on Remiro inside the area from Karim Benzema and Toni Kroos that almost resulted in a goal. The hosts responded with a header from Isak that Militão had to clear off the line.

The game was an open affair as both sides looked to carve out chances, until Benzema pulled up and had to be replaced by Luka Jović.

Despite the setback, Madrid remained comfortable both in possession and when there was a chance to hit the home side on the counter-attack, through Vini Jr.

On the half-hour mark, Kroos fired a free-kick into the wall. Imanol’s side looked to hit Madrid from set-pieces and after a fine piece of play by Januzaj on the right, Eder Militão superbly intervened to block Isak’s header from going in.

The last chance of the first half fell to Oyarzábal who sent the ball into the side-netting.

After the restart, Madrid once again went all out for victory and the goals duly materialised.

Rodrygo fired in a warning shot with an effort from the right and Vini Jr. made the breakthrough in the very next move.

The Brazilian picked up the ball wide on the right with 47 minutes on the clock and exchanged passes with Jović inside the box, before firing home from the penalty spot.

The Whites doubled their goal advantage 10 minutes later when Casemiro got his head to a corner and Jović pounced to finish after stealing a yard on Álex Remiro and the hosts’ defence.

After the hour mark, Carlo Ancelotti replaced Casemiro with Eduardo Camavinga and Rodrygo with Marco Asensio, whilst Fede Valverde entered the fray in place of Kroos.

Real Sociedad also introduced some fresh legs and forced a series of corners, but the madridista backline stood firm.

In the 86th minute, Vini Jr. had the chance to further extend Madrid’s lead after his 40m burst saw him latch onto Militão’s pass and bear down on Remiro, only for the shotstopper to parry his effort away.

No further goals were forthcoming as Real Madrid chalked up an eighth straight win ahead of Tuesday’s Champions League showdown against Inter Milan, in which the teams will do battle for top spot in Group D.