Orji Kalu: My imprisonment 2 years ago was destiny at play 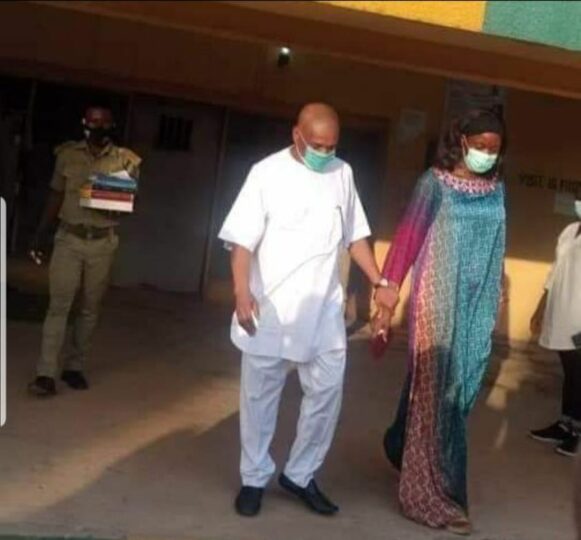 Orji Kalu and his wife leaving Kuje Prison 2 years ago.

Orji Kalu, a former of Abia State and a senator representing Abia North said his incarceration two years ago was destiny at play.

Kalu, who marked the second anniversary of his incarceration at Kuje prison on Sunday, said he was jailed for an offense not committed.

The ex-governor, however, noted that he has forgiven everyone instrumental in his imprisonment.

Today is the second anniversary of my incarceration at the Nigerian Correctional Service Medial Security Custodial Centre, Kuje, Abuja.

I was imprisoned for an offence I never committed. Despite all the witnesses rescuing themselves, I was pronounced guilty of 39 charges out of the 39 concocted charges leveled against me. What magic! In 1998, I used my money to fund the Peoples Democratic Party (PDP), my former party and individuals. I built several businesses and I left more than $4 billion balance sheet before venturing into politics.

Today, those who have done no business or multiplied any money parade themselves as holy saints whereas those who have worked hard and multiplied money are expected to be penniless. I am not a saint and should not be judged as one. I didn’t start life as a politician. I am a businessman; a capitalist with a human face.

When I was governor 14 years ago, I served Abia with my conscience and left a prosperous and popular state. I provided security, free education, infrastructure, built hospitals, and never owed salaries or pensions. I created the enabling environment for business growth, encouraged and supported many businesses, and also grew sports. After I left office as Governor in 2007, I stayed out of power for 12 years and only became a Senator in 2019. The beauty of constitutional democracy is term limit and at all times, the government is a continuum.

Today, my performance as governor is also being replicated as a Senator.

Aside from reconstruction of schools, material empowerment, medical outreach, job offers, I have completed more than 31 rural roads in Abia North and looking forward to others to be completed soon.

My dear friends and compatriots, I am grateful to God for the six months I spent in Kuje; He sanctioned it. God knows I fear no one except Him. Those who conspired against me wanted me buried at all cost, but like the biblical Job, there is a sense in which God allowed those temporary and tragic events to happen to Job. My perception of life changed after the six months of incarceration – life is vanity. I did not just learn a lot of lessons, I became a reformed and better man. I was very impacted by what happened to me. More than ever, I have relearned that kindness and forgiveness are what should rule the world, not wickedness. I have since forgiven all the people that were instrumental to my ordeal. I forgive them because they probably did not know what they were doing.

I recall that on the first night I slept in the prison, I was questioning God. On the third day, God told me He allowed me to be imprisoned for a purpose and for a short time. I vividly recall I was scheduled to be in Wuhan, China on December 9, 2019, but my incarceration halted my journey.

For some, my imprisonment may have meant different things to them; but for me, my family, friends, business and political associates, supporters, as well as well-wishers, it was destiny at play. Those who knew me early in life will bear witness that I am a child of grace and destiny. When I was a Student Union President at the University of Maiduguri, my activism led to my suspension and some of my executives from the school. Even though the school recalled me, I refused to return because my executives were not included. My life has been that of testimony.

For all my friends and colleagues sitting in the upper and lower echelons who stood by me and the people of Abia North during the trying period, I remain very grateful. Throughout the six months, I ate once a day. I am so much grateful to my lovely wife for her timely delivery of the food. Her love, care, patience, prayers and endurance kept me strong. I also thank my dear mother for her prayers and motherly concern which must have caused her so much trauma. God will continue to bless the two women in my life.

My special thanks and appreciation goes to the President of the Senate, Senator Ahmad Ibrahim Lawan for his loyalty to friendship. God will bless him and his family.

My profound gratitude also goes to Senator Ibikunle Amosun, Senator Kashim Shettima and Senator Sani Musa and a host of others too numerous to mention. May God show you love always.

The hatred, jealousy, betrayal, greed, bitterness in this country is enormous and terrible. People will just hate, curse, and envy you because you are successful, without considering how much hard work, energy, endurance, and patience you have expended in building businesses and your life.

How I so much wish for love and empathy in this country.
How I wish we can embrace and love each other.
How I wish people could be more loving and considerate towards their neighbors with zero sentiments of tribe and language.

How I wish people can have respect for human lives. I hope that with God on our side, our dreams will someday come true.

Kalu was convicted by the Lagos Division of the Federal High Court on Thursday, 5 December 2019, and sentenced to 12 years in prison for N7.65 billion fraud.

He was convicted for defrauding the government of Abia State where he was a governor for 8 years using his company, Slok Nigeria Limited.

He was held in custody at the Ikoyi prisons in Lagos.

In December, Kalu filed a bail application at a Lagos High Court pending the determination of his appeal against his conviction. On 23 December 2019, the court rejected his bail application for lack of merit.

On Friday,8 May 2020, the Supreme Court of Nigeria ruled that his trial was wrongly conducted and released him from prison while ordering a retrial.

On Friday morning, the Supreme Court deemed Mr. Kalu’s conviction inappropriate and ordered a retrial of the case, according to multiple media reports out of the court.

A seven-member panel of the apex court, in a unanimous verdict delivered by Justice Ejembi Eko, declared that the conviction null and void.