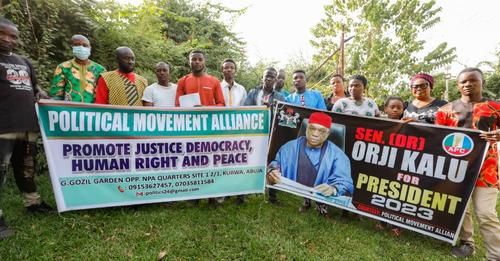 A pro-democracy group under the aegis of Political Movement Alliance (PMA), has endorsed the Chief Whip of the Senate, Sen. Orji Kalu, for 2023 presidential race.

The National Secretary of PMA, Mr Akinpelumi Bode, in a communiqué issued after the group’s monthly convention on Monday in Abuja, said that the leadership of the group, made up of 36 state coordinators, endorsed Orji to replace President Muhammadu Buhari in 2023.

According to Bode, Kalu is a potential candidate, de-tribalised politician and an accomplished business entrepreneur.

“We want to seize this opportunity to announce to Sen. Kalu that we are solidly, physically, mentally, emotionally and financially behind him, to lead this country come 2023.

“We therefore wholeheartedly endorse him for presidency in the 2023 General Election.

“It is without a doubt that we believe that presidential power should shift to the South East.

“Record has it that of our 61years of independence, Igbos have stood behind several leaders from different tribes in times past and now they expect Nigerians to stand by them in their quest for the presidency.

“If Nigeria truly wants to heal from the scars of the civil war, an Igbo man must be supported to lead Nigeria.

“The 2023 presidential poll is just over 20 months away, and there are already permutations on the zone that should produce the president.

“Majority are of the opinion that it is the turn of the South East, which has yet to produce a president since the return of democracy in 1999,’’ he said.

Bode pointed out that aside from the basis of equity, justice and fairness in the quest for an Igbo man to become president, there was also the need for progressive and corrective leadership.

Bode further urged political parties, especially the ruling All Progressives Congress (APC), to cede its presidential ticket to the South East region in the spirit of nationhood, equity, fairness and justice.

“Nigeria needs a de-detribalized leader with national and international contacts, who would consolidate on the infrastructure gains of the current administration, but most importantly, better manage the country’s diversity, retool the economy and deal conclusively with insecurity.

“The next president of Nigeria asides from being a de-tribalised politician should be an accomplished successful business entrepreneur and should have verifiable successful local and international business empires which he has established over the years.

“Using the aforementioned as a yardstick, Sen. Orji Kalu is the most accomplished among other business executives who ventured into politics, and he has successfully transitioned to become a successful political leader having also governed Abia State.

“He made iconic blueprints as the governor of Abia for eight years,’’ Bode said.

He added that Kalu was qualified in all ramifications having served at both the legislative and executive arms of government.