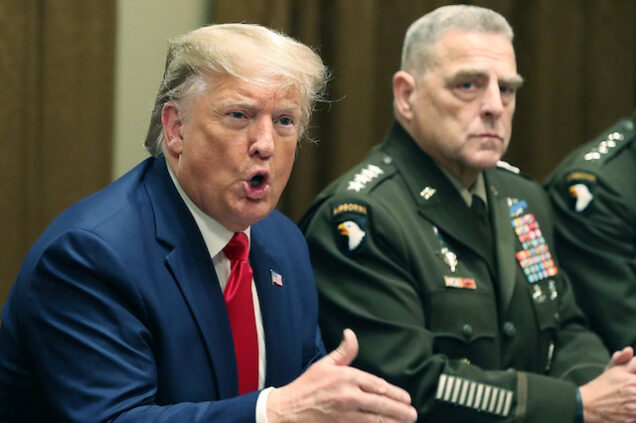 Former President Donald Trump has slammed Gen. Mark Milley for his role in the US withdrawal from Afghanistan, calling him ‘a fucking idiot”.

He blasted the US’s top military officer during a speech at the Mar-a-Lago resort in Palm Beach, Florida, on Saturday night, according to a trending video.

The video emanated from an event hosted by Turning Point Action, a conservative organization founded by activist Charlie Kirk.

“I said, the moment we get out, I want every nut, every bolt, every screw… we’re taking everything, we’re taking down the tents,” the former president said of the complete withdrawal of troops in August.

“They left all the tents. They left everything,” Trump said, eliciting applause from the crowd.

Trump told the crowd what he would have done if he had been president. He asked: “Couldn’t they have flown in a couple of hundred pilots and flown the planes out?”

Mocking Milley, the chairman of the Joint Chiefs of Staff, Trump said: “I’ll never forget Milley saying to me, ‘Sir, sir. It’s cheaper to leave the equipment than to bring it.'”

The former president told the crowd that the US left behind expensive airplanes and a “gorgeous” helicopter. “Many of them brand new, literally out of the box,” he added.

BBC News reported that 73 aircraft, nearly 100 vehicles, and other equipment were abandoned by US troops as they pulled out of Afghanistan.

“You think it’s cheaper to leave it there so they can have it than it is to fill it up with a half tank of gas and fly it into Pakistan or fly it back to our country?” Trump said.

“That’s when I realized he was a fucking idiot,” Trump said to applause.

Milley, 63, is the 20th chairman Joint Chief of Staff of the U.S. military. He was appointed by Trump.

Read all in Business Insider