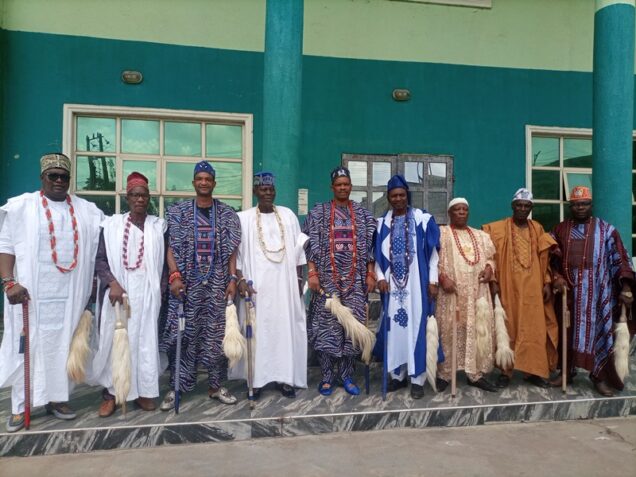 The 75 traditional rulers in Ogun, otherwise known as G75 have pledged their loyalty to Governor Dapo Abiodun who initially demoted them after they regained their status through the court.

A High Court of Ogun State had last week overturned the demotion of 75 coronet Obas to Baales (ward heads) by the Dapo Abiodun administration.

The coronet Obas were Baales before they were elevated by former Governor Ibikunle Amosun at the tail end of his tenure in 2019.

The Obas had challenged their demotion and in a ruling last week, the court affirmed their promotion and ordered Ogun State government to recognise their new status as coronet Obas.

Speaking on the development, members G75 through the Secretary, Oba Tanimowo Folarin, Olu of Ipebi, Ijebu-Mushin, lauded Governor Aboidun for giving the judiciary the free hands to treat and adjudicate on the legal challenge they filed against their demotion based on its merit.

“We, Traditional Rulers of various domains in Ogun state, we recognize His Excellency as our number one and no other person.

“We G75 Obas of Ogun State have been loyal and have also been working with his excellency for a better Ogun state.

“We’ve been playing a good role in term of administrating our various domains, our pledging loyalty is just to reassure His Excellency that what we have been doing, we would continue to do more.

“Regarding the judgment, we are not fighting the government, we just feel normal things should be done since the court has pronounced. We are happy and I know our government too would be happy, His Excellency believes the right thing should be done and that is what we are also doing.

“We have been on thing issues for over two years and we have been living our life and we have a government that respects the law. We don’t envisage anything negative.

“We are giving the government full assurance that we here for them and also we would communicate to the government through writing which we have been doing over years,” he said.

The G75 Obas also expressed their gratitude for the administration of Governor Dapo Abiodun, especially on the completion of the projects he inherited, saying, “There are many projects that has not been completed and Prince Dapo Abiodun has completed some and is still working on them.”

The secretary of G75 said ” I have never meet ex Governor Ibikunle Amosu, I have no relationship with him, but I know he is one of the Senators in Ogun State and I have been installed as Baale for over 10 years.