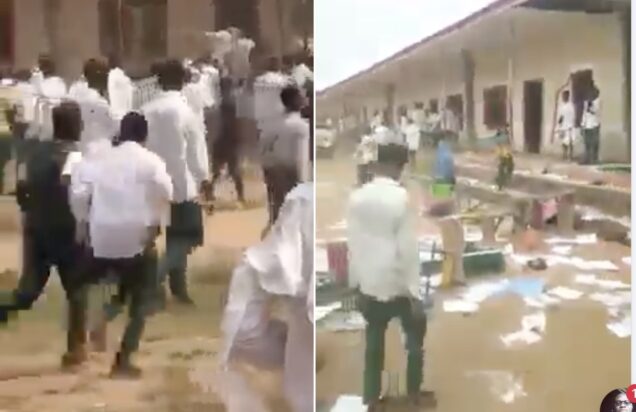 Students of Idogbo Secondary School during their riot

The Police Command in Edo has arrested 45 students in connection with an attack on teachers and the police at Idogbo Secondary School in Ikpoba-Okha Local Government Area of the state.

SP Bello Katongs, the Police Public Relations Officer (PPRO) of the command, confirmed the arrest on Tuesday in Benin.

According to him, the students were arrested in the bush, where they were hiding.

Katongs said that some of the arrested students have been arraigned in court.

Students of the school on Friday went on a rampage, destroying cars and other facilities in the school.

The students also reportedly set some offices ablaze and attacked police officers that were deployed to the school to maintain law and order.

A source blamed the crisis on the unwillingness of the students to write terminal examinations.

“As our tradition here is during the end of every term examinations, we do invite security officers to avoid any breakdown of law and order.

“The exam was to finish on Dec. 10, that is some days before vacation.

“But, days before the start of examinations, we were battling with students throwing fireworks in the school compound.

“When the examinations started, we invited some policemen and vigilante members in case of any eventuality.

“So because we anticipated that there could be disturbance, the first set of policemen came, while we waited for others.

“Suddenly we noticed students chasing one of the policemen on duty around the compound and some of his colleagues came to his rescue.

“Before we knew it, other students began to throw stones and other weapons.

“When the situation became uncontrollable, teachers started scampering for their lives and the students went berserk, destroying everything on sight.

“The Police sought for reinforcement, but yet they couldn’t control the crisis until men of the Department of State Service (DSS) arrived and scared them with gunshots,” he said.