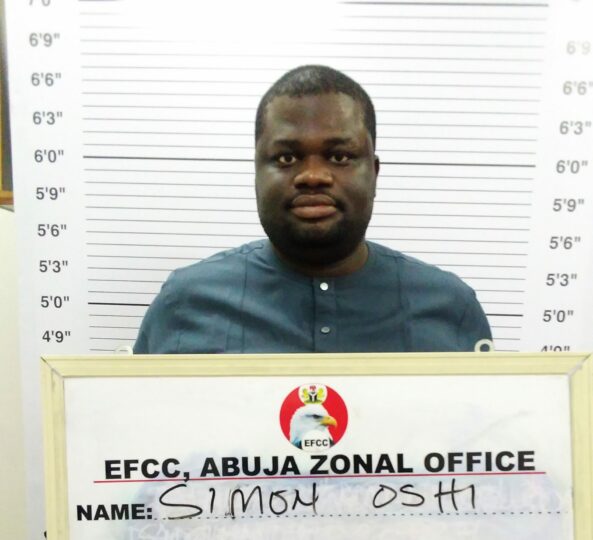 Oshi was arraigned for the alleged issuance of a dud cheque.

The defendant was alleged to have received 400 pieces of iPads from Aweskim Technologies Limited and issued a cheque of N38,000,000:00 (Thirty-Eight Million Naira) only to the supplier as consideration for payment, but the cheque was returned unpaid due to insufficient funds standing to the credit of the drawer.

The charge reads: “that you, Simon Oshi, sometime in September 2020, at Abuja within the jurisdiction of the High Court of the Federal Capital Territory did issue a Diamond Bank Cheque in the name of your company THE PROLIFICK ENTERTAINMENT CONCEPT, with serial No: 18416622 dated 3rd day of September 2020 in the sum of N38,000,000.00 (Thirty-Eight Million Naira ) only to Aweskim Technologies Limited which when presented on the 3rd day of September 2020 was returned unpaid on the ground that no sufficient funds were standing to the credit of the drawer as at the date it was presented and you thereby committed an offense contrary to section 1(1) (a) and punishable under section 1 (1) (b) (i) of the Dishonored Cheques (Offences) Act, Laws of the Federation, 2004”.

Oshi pleaded not guilty to the charge.

Justice Osun -Adebiyi granted the defendant bail in the sum of N10, 000,000:00 (Ten Million Naira) and two sureties in like sum. One of the sureties must be a relative of the defendant.