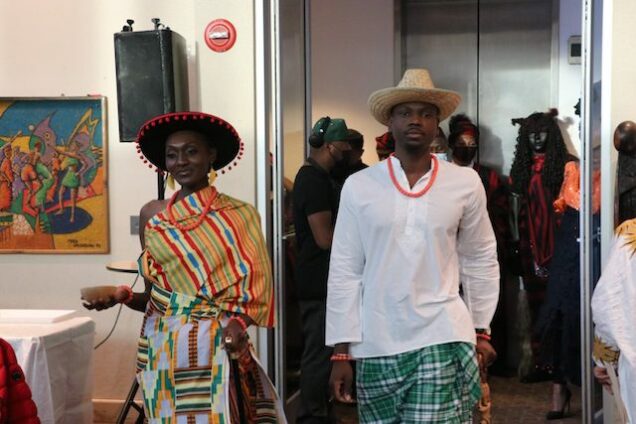 Nigeria’s rich culture came on display in New York as the Consulate-General of Nigeria showcased the traditions of the people of Rivers, Cross River and Benue States.

The Second Edition of the Nigeria Cultural Show, featured cultural displays from the Andoni and Opobo of Rivers, Efik of Cross River and Idoma from Benue.

The minister said the inaugural show organised by the Consulate-General in July, which showcased the Argungu Fishing Festival and the Osun Osogbo Festival, had produced positive results.

Dada explained that some tourists from the U.S. travelled to Nigeria shortly afterwards to attend the Osun Osogbo Festival in August.

He commended the Consulate-General for the initiative of ensuring that Nigeria’s diverse and rich culture was propagated, enjoyed and preserved to be handed over to generations yet unborn.

The minister also commended Nigerians in diaspora for their support and for displaying their cultural attires at the show.

“Your continued support in the promotion of Nigeria’s potential and achievements in various fields of human endeavours is commendable,” he said.

“We will continue to collaborate with you for the greater glory of Nigeria as we invite you to join hands with the mission and the government of Nigeria in attracting development to your home country.”

Dada said Nigeria would continue to explore culture and tourism as veritable tools to strengthen ties with other nations.

“I have no doubt that after this show today, you would have a better understanding of Nigeria and the heightened sense of admiration of our rich cultural heritage,” he said.

“Our country, Nigeria is richly blessed with a rainbow of culture from which oozes our strength in diversity.”

Nigeria’s Ambassador to the U.S., Dr Uzoma Emenike, who spoke virtually at the event, said Nigeria’s culture was the legacy of cherished manifestations of human and intellectual achievements shaped by people of different languages.

Emenike said Nigeria’s culture was shaped by more than 500 languages with over 1,500 dialects of various ethnic groups.

“It is evident that we are endowed with required population, tourist attractions and rich natural resources,” she said.

“You will agree with me that despite our challenges, our cultural diversity and our endowment in terms of natural resources have given us enough reasons to celebrate Nigeria.

In his remarks, the Consul-General, Amb. Lot Egopija, said the Consulate-General collaborating with the Nigerian community provided an opportunity for diasporas to contribute towards the preservation and transfer of culture and norms through generations.

“The governments of Bayelsa and Zamfara States have also indicated interest in promoting their states in subsequent cultural shows.

“So, sometime in 2022, the Consulate, the two states and the Nigerian community will showcase the cultures, traditions and natural resources of the people of Bayelsa and Zamfara States,’’ he said.

The Permanent Representative of Nigeria to the UN, Prof. Tijjani Muhammad-Bande, said showcasing Nigeria’s cultural heritage strengthens the bonds of friendship among the Nigerian people.

President of Manhattan Borough, Ms Gale Brewer, paid tributes to Nigerians in the U.S. for excelling in their various endeavours and for raising Nigeria’s flag high.

Speaking on Opobo, Prof. Iyala Peterside said the culture of the people was derived from the Igbo of the hinterland.

Peterside said the culture was demonstrated through a display of rituals marking the transition from youth to adulthood, marriage celebrations and artistic performances by masquerade and organised troupes by men and women.

He said Opobo kingdom was a tourist haven and boasted of ancient relics, principally the monument of King Jaja, buildings reminiscent of the palm oil trade era and numerous relics of the nineteenth century.

The event, with the theme “Nigeria: Our Community, Our Cultures and Our Unity’’, also showcased cultural dance troupes, musical performances and cultural fashion displays, particularly from the three featured states