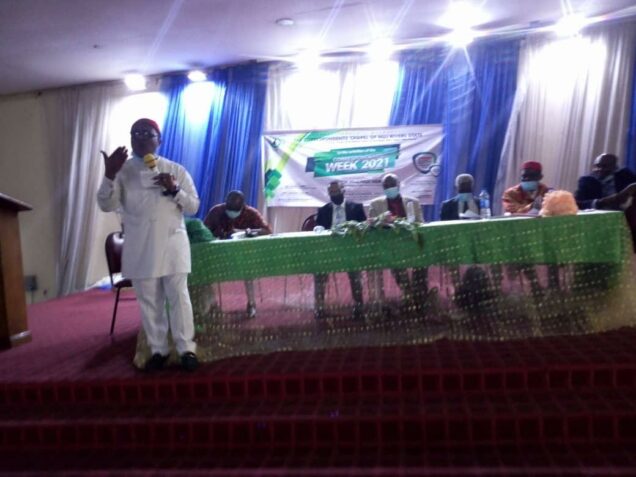 Rivers Commissioner for Information and Communications, Paulinus Nsirim, has charged journalists to continue to hold public office holders accountable in all their actions.

Nsirim stated this while declaring open the 2021 Week of the Correspondents’ Chapel of Nigeria Union of Journalists (NUJ), Rivers State Council’s, on Monday December 6, at the Conference Centre of the Ministry of Justice, Rivers State in Port Harcourt.

He admitted that journalists are facing challenges from attacks from hoodlums, thugs, and even security agents.

Represented by the Director, Public Enlightenment, Ministry of Information, Mr Celestine Ogolo, the Commissioner said the governor of Rivers State, Nyesom Wike, has granted unhindered access to information in the state.

He described the theme of the week which is “Survival of Journalists in Security and Economic Uncertainties in Nigeria; Focus on Strategic Reporting of the Maritime Sector”as apt and revealing.

Nsirim added that Wike has done well in providing infrastructural facilities for the people, pointing out that Rivers State in the near future will become a model to other states in the country.

In his opening speech, the Chairman of the occasion, Chief Ogbonna Nwuke,a former member of House of Representatives, and a veteran journalist said the media will continue to determine the future of the society as Fourth Estate of the Realm.

Nwuke commended the Correspondents’ Chapel for organising the press week despite the COVID-19 pandemic. He noted that the event was an avenue for journalists to rob minds on the way forward.

He specifically lauded the Correspondents’ Chapel’s Chairman, Mr Amaechi Okonkwo, for doubling as Caretaker Committee (CTC) Chairman in the State. He urged him to sustain the tempo, while ensuring that the State Council of NUJ returns to normal.

Also Speaking, the Head, Corporate Communications of Ndorama Petrochemicals, Dr Jossy Nkwocha, said gone are the days when journalists aspired to end up as veterans. He challenged journalists to instead leverage on their positions to become lecturers, political leaders, business tycoons.

He urged them to start by registering business names to compete in corporate entities.

Nkwocha equally said that there is nothing wrong with journalists transforming from reporters to become authors and earn good money. He urged them to research on topics around their areas of coverage and do books out of them.

According to him, it is ironical or pathetic that journalists who preoccupy themselves with fighting and defending others are kept captive by many issues in their operational environment.

He cited the lockdown era, occasioned by COVID-19, where he said journalists went all out to defend the society as frontline workers, but ended up being neglected when frontline workers were being listed and compensated.

Okonkwo also said that it is regrettable that media practitioners as members of the Fourth Estate of the Realm globally, have not been allowed to occupy that position in Nigeria by deliberate hostile policies of Government for reasons best known to them.

“That rating or consideration is only true in other climes and not in the case of Nigeria,” he said.


The Correspondents’ Chapel chairman stressed that evidence has shown that the first to third estates have taken up all the spaces in the realm leaving no one for the media. He said this year’s chapel’s week is to assert the space of the Fourth Estate.

He further pointed out poor remuneration of journalists, lack of insurance policy for media practitioners, among others, as deficiencies that have left the media and journalists at the mercy of harsh economic realities. He said this has made it impossible for them to operate at full capacity.