Why LPG should be transition fuel in developing countries - Osinbajo 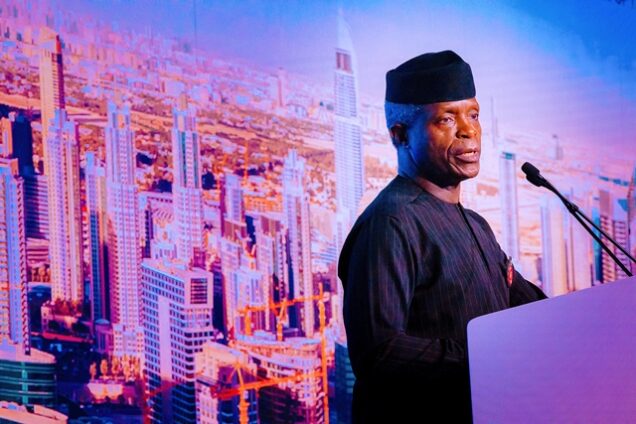 Nigeria’s Vice President, Prof. Yemi Osinbajo has said the world should not have to choose between energy poverty and climate change as this can be addressed with both natural gas and Liquified Petroleum Gas (LPG) as transition fuels alongside other renewable sources.

Speaking on the theme “Energizing Tomorrow” at the Dubai World Trade Centre, Osinbajo noted that it was worrying that a growing number of wealthy nations have banned or restricted public investment in fossil fuels, including natural gas.

“Such policies often do not distinguish between different kinds of fossil fuels, nor do they consider the vital role some of these fuels play in powering the growth of developing economies, especially in sub-Saharan Africa,” he stated.

“As development finance institutions try to balance climate concerns against the need to spur equitable development and increase energy security, the United Kingdom, the United States, and the European Union have all taken aggressive steps to limit fossil fuel investments in developing an emerging economies.

“The World Bank and other multilateral development banks are being urged by some shareholders to do the same. The African Development Bank, for instance, is increasingly unable to support large natural gas projects in the face of European shareholder pressure,” he stated.

While he acknowledged that all countries have a part to play in the fight against climate change, Osinbajo emphasized that “a global transition away from carbon- based fuels must account for the economic differences between countries and allow for multiple pathways to net-zero emissions.”

The VP, who was accompanied to the event by Kaduna State Governor, Nasir El-Rufai, the Nigerian Ambassador to the UAE, Mohammed Rimi, among others, submitted that it should not be necessary to have to choose between energy-poverty nexus and climate change since both could be properly addressed simultaneously.

Noting that there were still close to 600 million Africans without access to electricity, Osinbajo observed that, “for developing countries, unlike the rest of the world, the transition to net zero emissions posed two… existential problems.”

Explaining the imperative for the global community to balance concerted efforts at addressing global climate crisis with energy-poverty issue in developing economies, he said, “aside from the climate crisis, we have the problem of lifting millions out of extreme poverty. And access to energy is a huge part of that.

“For the few with access to electricity, it is either unreliable due to lack of generating capacity and infrastructure, or unaffordable due to high prices. But a more important aspect of that problem is the 2.6 billion people globally without access to clean cooking solutions, including over 900 million in Africa.”

Continuing, he said, “in fact, this energy-poverty nexus has distinct gender characteristics. A report from the World Health Organization revealed that about 4.3 million people die annually from inefficient cooking practices using polluting stoves paired with solid fuels like charcoal and kerosene… So, clearly there is an urgent need to transition from these fatally hazardous fuels to cleaner energy.”

Citing Nigeria’s efforts at balancing energy security with environmental sustainability, Osinbajo stated further that the Federal Government has developed an Energy Transition Plan “which shows that achieving net-zero by 2060 will require investments of about $410 billion, above business as usual, and that natural gas will play a critical role in addressing the clean cooking challenge, as well providing grid stability to integrate renewables at scale.”

According to him, “Nigeria has also developed an integrated energy plan with a clean cooking model which shows the clean cooking opportunities across technologies such as electric- cooking and LPG.

“This model shows that there is an opportunity to transition at least five million households to LPG solutions, which will cut emissions by 30% compared to business as usual, reduce other pollutants by 90% or more and avoid 6.9 billion kilogrammes of forest loss from biomass collection.”

The VP added that “LPG remains an ideal fuel to support the journey to renewables, as it is easily stored, does not degrade over time, requires no heating or complex filtration to keep the fuel in a usable condition, and does not constantly boil off.”

He said that for a gas-rich country like Nigeria with over 206 TCF of proven reserves and an additional 600 TCF scope to be proven, “it is evident that what makes the most sense from the point of view of balancing energy security with environmental sustainability is the use of LPG at least as a transition fuel.”

Citing Nigeria as an example, Osinbajo said, “for countries such as my own, that is rich in natural resources but still energy poor – from the point of view of access, the transition must not come at the expense of affordable and reliable energy for people, cities, and industry. On the contrary, it must be inclusive, equitable, and just—which means preserving the right to sustainable development and poverty eradication as enshrined in global treaties such as the Paris accord.

The Vice President then made reference to Nigeria’s Energy Transition, observing that the plan is tied to adopting and domesticating all forms of cleaner energy.

“These cleaner energy systems include solar for electricity, waste to energy, wind energy, hydro power and natural gas. which aims to adopt and domesticate all forms of cleaner energy sources from household use to commercial use,” he stated.

Buttressing his points, the Vice President highlighted other proactive policies and plans of the Federal Government put in place since 2017.

He mentioned particularly the implementation of Nigeria’s Domestic LPG expansion initiatives, including the LPG policy as part of its National Gas Policy; the National Gas Flare Commercialization Programme; as well as specific provisions in the new Petroleum Industry Act (PIA) 2021 that elevates LPG as the fuel of choice compared to other competing fuels.

“And we have established a 20 million Cylinder Injection Scheme; 5 -10 million of these are to be introduced in pilot States next year. We have also established an LPG Energy Fund in the order of $50 million, in its first phase, in partnership with AFREXIMBANK,” the Vice President disclosed.

He also listed the mandated conversion of 58,000 Telecommunications cell sites from diesel to LPG due to identified emissions from the industry and an Autogas conversion scheme and capacity building in the 12 pilot States.

Continuing, Osinbajo explained that the FG has “consummated a collaboration with the EU through a study on CO2 savings based on the National LPG Expansion Implementation Programme for Clean Cooking. Also in the last three years, several LPG coastal terminals have been opened in Lagos, Warri, Port Harcourt and Calabar, with the latest one opening in Warri later this month.

“We also have a waiver of import duty on machineries, equipment and spare parts for the establishment of LPG plants for 10 years (subject to renewal) and a 5 – Year Tax holiday for investors in the LPG value Chain.”

While the Vice President stated the desire of the Federal Government to support investors, he noted that Nigeria’s “interventions would result in significant reduction in the rate of deforestation and create millions of direct and indirect employment opportunities for Nigerians.”

Aside from being an effective transition fuel, the VP asserted that “LPG is set to be part of the destination as it is being used as a precursor for green hydrogen with zero emission,” adding that “an eventual move to bio-LPG will allow countries like Nigeria to keep existing infrastructure in place, capitalize on already existing supply and distribution chains and reach net-zero at far lower cost.

He said, “this also helps to overcome the concern of stranded assets. Consumers will not have to re-invest in expensive electrical solutions if their gas appliances can be re- purposed for zero carbon LPG.

“Our target is 5,000,000MT, and this requires at least USD$6 billion for the required LPG infrastructure roll-out to meet our target. From inland and coastal terminals to cylinder filling plants, bobtails, semi-trailers, valves and regulators, Nigeria presents a unique LPG investment destination for setting up manufacturing facilities and support services for the expanded LPG value chain in the National LPG Expansion.”

Vice President Osinbajo was later conducted round the exhibition stands put up by different participants at the WLPGA Week.

Other speakers at the grand opening of the WLPGA week included the UAE Minister of Energy & Infrastructure, Suhail Mohamed Al Mazrouel; the Deputy Director-General, International Renewable Energy Agency, Ms. Gauri Singh; and the CEO of the WLPGA, Mr. James Rockall.