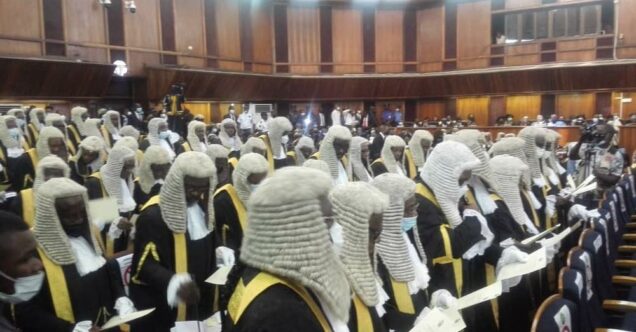 The new senior advocates of Nigeria

The Chief Justice of Nigeria, Justice Tanko Muhammad, on Wednesday, swore in 72 lawyers recently elevated to the rank of Senior Advocates of Nigeria (SAN).

The ceremony which took place at the main courtroom of the Supreme Court in Abuja marked the commencement of a new legal year for the apex court.

Out of the 159 senior lawyers that applied for the rank during the year, 72 made the list, of which 10 are academic appointees and 62 advocate appointees.

The CJN admonished them to forge ahead with the right mindset and disposition to attain more impactful results.

He said the Supreme Court and by extension, the Nigerian Judiciary, had fared well in the outgone legal year even though the horizon was roughened by overwhelming challenges.

“As this new legal year unfolds, we will like to assure you that we are determined to work assiduously to evolve a judiciary that will remarkably be the pride of Nigerians, home and abroad.

“I must say with pride and exhilaration that during the outgone year, we experienced so many positive heartwarming news in the Nigerian judiciary.

“For the first time in the history of the Supreme Court, we swore in eight justices to fill the positions vacated by our esteemed colleagues who retired.

“We also enlarged the profile of our judicial strength by increasing the number of justices to an all-time high number of 20 and that indeed was first of its kind in our history,’’ he said.

Abubakar Malami, the Attorney-General of the Federation and Minister of Justice, while speaking at the ceremony said the judiciary had continued to complement other arms of government in spite of the challenges by COVID-19, insecurity and dwindling economy.

“The judiciary has helped in the preservation of the country’s hard-earned democracy.

“I want to state categorically that the LPPC has done a good job by putting forward deserving and qualified lawyers and they must ensure that due process is followed in subsequent selection.’’

The Legal Practitioner’s Privilege Committee (LPPC) had in October elevated 72 legal practitioners in Nigeria for conferment with the rank of SAN.