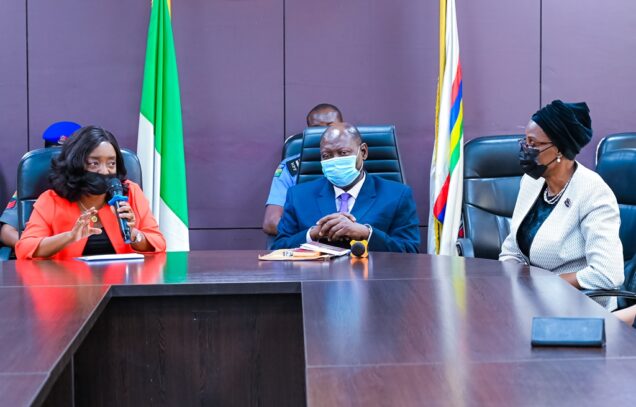 Lagos First Lady, Dr Ibijoke Sanwo-Olu has vowed to continue to be a voice to the voiceless towards stamping out all forms of Sexual and Gender-Based Violence (SGBV).

She spoke during the continuation of her SGBV advocacy visit to the Lagos State Judiciary, the State Police Command, and various Non-Governmental Organizations (NGOs).

The advocacy visit was in furtherance of the ongoing global 16 days of activism against SGBV designed to eliminate violence against women and girls.

At the State High Court, Ikeja where she was received by the State Chief Judge, Hon. Justice Kazeem Alogba, Sanwo-Olu commended the judiciary for supporting the fight against SGBV.

According to her, the conviction of perpetrators sends a clear message against the menace.

“It is important we come here to appreciate the Hon Judges and principal officers of the High Court of Lagos. We would like to say a big thank you to the judiciary for all you are doing in Lagos State.

“We have realized that we have to visit the special offences and domestic violence courts and family courts to understand how the judiciary dispenses their cases.

“Therefore, we will encourage victims to use these family courts and not jettison their matters and opt for juicy offers by the perpetrators.”

“I am a voice to the voiceless and I will use my position to achieve that to the best of my ability. If someone is being raped somewhere, they should have hope and know that I am their voice.

“We cannot achieve this alone, it is a collective effort by all stakeholders, like the Ministries of Health, Education, Youth and Social Development, Women Affairs and Poverty Alleviation, Justice, Judiciary, among others, and that is why we are here,” she said.

Meanwhile, she said it was gratifying that the Sex Offenders Register was now operational in the state to name and shame perpetrators.

“On our part, a lot has been put in place to raise awareness on SGBV. We have sensitized community and religious leaders. Also, we have started our school advocacy by ensuring that we catch them young and sow seed from a tender age.

“We plan to inaugurate a Students’ Council, where students are made to be advocates in their homes, schools, and communities at large. Quite a number of them were alarmed at the consequences of rape and attempted rape,” she said.

At the Police Command, she emphasized the need for training and retraining of police officers so that knowledge is not terminated due to postings of officers nationwide.

In addition, she harped on the issue of preserving evidence such that victims do not tamper with evidence such as used condoms, torn clothes, pants, body discharges, among others.

Equally, she visited some NGOs – CeceYara Foundation which is a child advocacy centre for abused children and God’s Home for Women Foundation where she donated cash gifts and information materials on SGBV including books and stickers.

On her part, she donated books and other gift items at the High Court, while the police Command got a photocopying machine and Desktop Computer from the First Lady in support of the fight against SGBV.