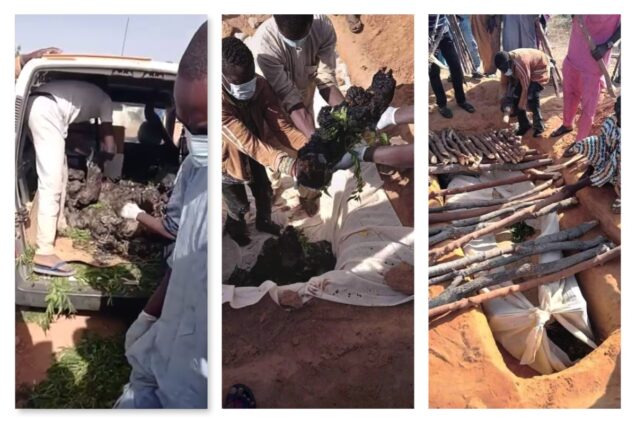 Between 24 to 30 bus passenger in Nigeria’s Sokoto state were burnt to death when terrorists torched it on Monday, police and residents said.

The terrorists, known locally as bandits, have in the past year carried out violent attacks targeting villagers and commuters travelling on highways and kidnapped hundreds of school children for ransom in the north of the country.

Sanusi Abubakar, spokesman for the Sokoto Police Command, said the bus was carrying 24 passengers when it was set alight by armed men and that seven people had escaped with injuries and taken to hospital.

But two residents who reached the scene and helped retrieve bodies said that the bus was overloaded and the bodies were burnt beyond recognition.

According to reports, the bandits first fired at the bus, before setting it ablaze.

They counted body parts of at least 30 people, including women and children.

The residents said the villagers were ambushed on a road linking the Sabon Birni local government area and the village of Gidan Bawa.

The terrorists move around on motor-bikes and are known to hide in forests, where they often keep kidnapped victims while awaiting ransom payment.

One of the hospitalised survivors of the attack related his ordeal to Rundunar Adalci, a human rights group.
.
“I’m from Rumbukawa. We were attacked by bandits yesterday before we reached Bayin Gidan Bawa.

“They shot several people that tried to escape and burnt down the vehicle. I don’t know what happened to my co-passengers but two of us miraculously escaped death,” he said.

“They were 24 people including men and women in the bus. There were several infants and children in the vehicle.

“For now, we have eight people with several degrees of injuries that have been taken to the General Hospital in Isa town. The chairman of Isa town has settled the medical bills,” he said.

Mr Guyawa said five of the passengers died in the hospital. He said they were three women, a girl and a man.