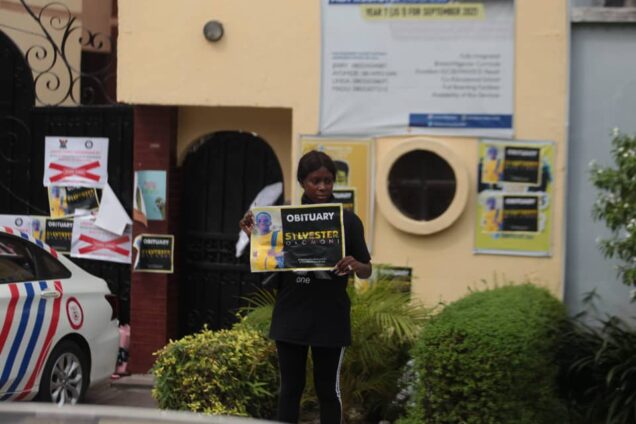 Protesters at Dowen College in Lekki

Some  Nigerians have stormed the Dowen College in Lekki area of Lagos State to protest against the death of 12-year-old student, Sylvester Oromoni.

Oromoni died 30 November after he was allegedly beaten by at least five seniors who intended to lure him into cultism.

The incident had triggered reactions from concerned Nigerians who have continued to demand justice for the boy, saying such atrocities against innocent school children must stop.

The Lagos State government shut down  the school to allow for proper investigation into the incident in a bid to unravel the cause of the death.

On Wednesday, some aggrieved Nigerians were seen barricading the entrance of the school.

The protesters who dressed in black, were heard chanting “justice for Sylvester”, demanding that the school authorities be held accountable for failing to protect the deceased and others who may have gone through such ordeal.

See some photos below;