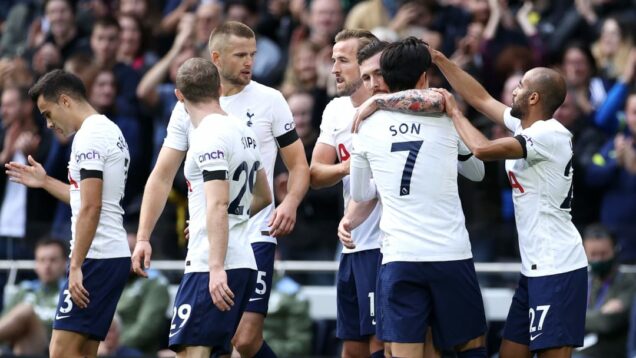 Tottenham manager Antonio Conte said on Wednesday that eight players and five members of staff had tested positive for COVID-19.

Spurs are due to play a crucial Europa Conference League game against Rennes on Thursday and UEFA has said the match is due to take place as scheduled.

There were speculations by British media Wednesday that the club will ask for their Premier League match at Brighton on Sunday to be postponed.

“Eight players and five members of staff,” Conte said at a press conference, which was held virtually rather than in person at the club’s Hotspur Way training centre.

“Every day we are having people with Covid, people who were not positive yesterday. This is not a good situation.”

Conte was supposed to be joined by Danish midfielder Pierre-Emile Hojbjerg at the pre-match press conference, but instead faced the media on his own.

“To speak about football today is impossible,” said the Italian, who became Spurs boss last month.

“The last situation made me very upset.

“The situation is serious. There is a big infection. We prepare for the game against Rennes, but it is very difficult.

“Again at the end of the session, one player (tested) positive, another staff (member) positive — tomorrow, who (will it be)?

“Now, for sure, we are a bit scared because tomorrow we don’t know what happens.”

The coronavirus pandemic largely forced football behind closed doors last season but full crowds have returned to English football during the current campaign even though Covid-19 infection levels remain high.

The Premier League on Monday reported 12 new positive coronavirus tests out of 3,154 tests among players and club staff. It was the highest figure since late August.

The new Omicron variant has caused global concern over signs that it can transmit faster than previous strains and fears that its multiple mutations could help it evade immune defences provided by vaccines.

No deaths have yet been associated with the variant.

An emotional Conte admitted the situation was “so strange and incredible”.

The Italian added: “This for sure makes me upset because I am here to talk about football, about my players and the atmosphere that I want to see tomorrow. Instead we are talking about the people that have Covid.”

Conte was not able to confirm whether it was the Omicron variant at the centre of the outbreak, but confirmed he had been vaccinated.

Referring to vaccination take-up within his squad, the Spurs boss said: “I think everyone takes (their own) best decision and is a question for the medical department about people that whether they are vaccinated or not.”

Rennes are already through to the last 16 of the Conference League as group winners while Tottenham currently lead Vitesse on overall goal difference in the battle for second place.