Why Afreximbank is building African Medical Centre in Abuja: Oramah 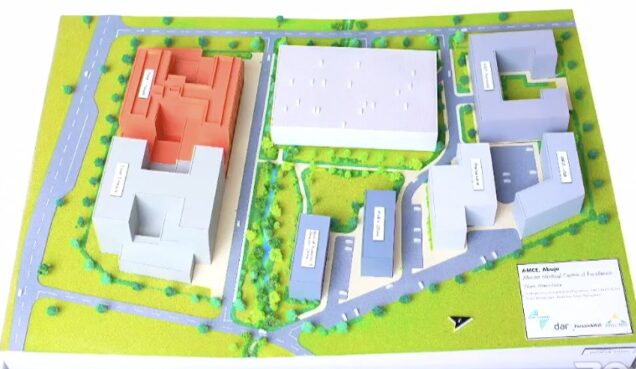 Prototype of the African Medical Centre of Excellence in Abuja

Prof. Benedict Oramah, President and Chairman, Board of Directors, Afreximbank, has said that his ill-health in 2013 and the medical attention he received triggered his support for the construction of African Medical Centre of Excellence (AMCE) in Abuja.

Oramah said this on Tuesday, in Abuja at the groundbreaking of a 500-bed AMCE expected to cater for the health needs of Nigerians and other Africans.

President Muhammadu Buhari, represented by the Minister of Health, Prof. Osagie Ehanire, performed the groundbreaking of the centre with the hope that it would discourage medical tourism abroad.

The AMCE has a special partnership between Kings College in London and the Christie Cancer Hospital in Manchester.

Oramah noted that he was moved by the quality of medical care and treatment he received for nine months while on admission at the Kings College Hospital, and as such the need to replicate such hospital in Africa.

“The luncheon today has strong links to difficult personal experience of mine; in 2013 an inexplicable coincidence of events took place and a number of staff and family members fell seriously ill; I was one of them.

“I was so ill that I nearly died. I spent nine months getting treated.

“I was evacuated to Kings College Hospital in London, where I came under the care of Ghulam Mufti, Professor of Hemato-Oncology and his colleagues.

“I had the hope of survival because of the competent doctors and healthcare workers around.

“As far as excellent facilities and Kings College was there, there was no doubt that I survived, and I stand before you today because I was privileged,” Oramah.

He assured that the Afreximbank team would ensure that the centre which would run in collaboration with the Kings College Hospital would be a place of pride as far as quality healthcare was concerned.

Oramah noted that Africa deserves better healthcare from what was obtainable presently.

Minister of Health, Prof. Osagie Ehanire said that efforts would be made to ensure some Nigerian medical experts abroad returned home to take charge of the centre.

“We will repatriate Nigerians from the diaspora who have the knowledge and skill, to come here and make it available to Nigerians.

“They will pass the knowledge and skill on to others because the centre will also be a training institution and a research institution.

“We will have first value for this investment which is entirely non-government expenditure except for the land which government has provided,” he said.

Earlier, Prof. Ghulam Mufti, who is also the Clinical and Medical Adviser on the AMCE project, said the hospital would be completed in two phases.

“The phase one will comprise of the 170 in-patient beds that will start taking patients in two years from now and the phase two will follow soon.

“The first phase will provide comprehensive cardiovascular care centre; this centre will provide state of the art cardio diagnostics, imaging technologies together with expertise for complex and other vascular therapeutics.

“The treatment will be all inclusive such that the need to go outside the country for any treatment, we hope, will be totally eliminated,” Mufti said.

The Professor of Hemato-Oncology also said that the AMCE would also serve as a place for bone marrow transplant and a hospital for the treatment of blood diseases like leukemia and sickle cell.

According to him, the ambition and plan is to create a network of medical centres of medical excellence throughout Africa and link them through advanced digital technology.

He added: “through Kings College commercial services, we are delighted to have signed a long term collaborator agreement to deliver our world class services to the population of Nigeria and beyond.

“The centre will be an exemplar for laboratory diagnosis. It will serve as a hub for molecular diagnosis that will not only serve the local needs but the country’s need as well as needs in the sub-Saharan Africa.

“As Prof. Oramah has mentioned, there will be comprehensive clinical trials, training and education centre within the AMEC.

“We will create an infrastructure to drive clinical trials infrastructure, bio-banking and to attract pharmaceuticals and bio-technology companies to work with the centre to introduce new drugs.

“The companies will also initiate research with other global institutions both in Europe and in U.S. and beyond.”

FCT Minister, Mohammed Bello assured that all the roads linking the AMCE would be completed within two years before the accomplishment of the project